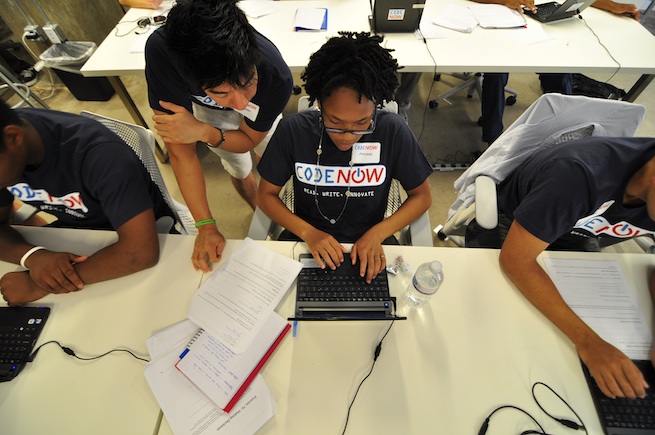 It only took a few months for Wilfred, a teen from a rough neighborhood in Washington D.C., to begin handing out handwritten business cards with the title “future engineer.” 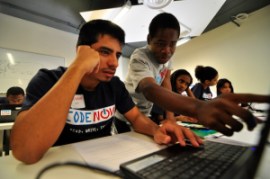 With a presence in D.C. and now San Francisco, CodeNow is a nonprofit that encourages high school students from inner city neighborhoods to pick up coding skills. Wilfred (pictured left, teaching a fellow student) was one of the first to join the program — he practiced up to five hours a night and has a proclivity for the programming language Ruby on Rails.

Wilfred’s was just one of the many heartwarming stories shared at the launch event, held at a co-working space in San Francisco this week. In attendance were venture capitalists, entrepreneurs, and other high-profile members of the local tech community. Jonathan Abrams, founder of Friendster, and Roy Bahat, chairman of Ouya, are among the organization’s supporters.

“About 40 percent of the students have the potential to be developers,” said CodeNow founder Ryan Seashore during a phone interview with VentureBeat. Once they pick up these skills, the kids increase their chances of getting into a top engineering school at college, and many aspire to become entrepreneurs.

There are already over 50 alumni of the CodeNow program, which has close ties to the tech community. Teens are given netbook computers when they enter the program and sign up for 45 hours of programming training after school and during the summer or winter break.

Once they complete the program, some of the graduates land internships at tech startups like LivingSocial. The internship program is still under development — Seashore told me he’s hoping to connect with tech companies in the Bay Area that would be willing to mentor a budding developer.

Seashore had the idea for CodeNow in early 2011 when he struggled to find a great programming class. “If I’m having trouble finding a program, these kids must not have a shot,” he told me. Convinced that high school students, particularly those from underrepresented communities, would be empowered by learning to code, he launched a pilot class.

CodeNow is currently oversubscribed, and its focus is on maintaining diversity. The program’s directors are particularly proud that 40 percent of its students are girls.

Seashore is confident that CodeNow will be met with a warm welcome in the Bay Area, the nation’s tech capital. “We can do it if we get the financial resources and the right companies behind us. It’s the perfect place for our program,” he said.

CodeNow is looking for volunteers, mentors, programmers, board-members, and donors in D.C. and San Francisco. If you’re interested, apply through the site.