Nick Gregg is CEO of StrategyEye

Almost every brand or company is becoming a publisher of these days and shifting budgets from ‘traditional’ online advertising into content marketing in order to attract leads.

There are plenty of content marketing specialists out there offering advice and content writing, but alongside these are more and more software-as-a-service platforms with nifty solutions for curating, publishing and automating the distribution of content – all adopting slightly different business models to take a slice of this growing market.

Venture Capitalists have invested heavily in these SaaS start-ups in the past 12 months – alongside growing mergers and acquisitions by the large media players eager to participate in the trend. Below we take a look at some of the recent investments and investors and where that money is being focused.

Example Investments in Past 12 Months

We’ve outlined below (courtesy of the analyst team at StrategyEye) a sample of the investments across the wider content marketing ecosystem over the past 12 months. With a few exceptions most tend to be under $10 million and more frequently below $5 million, indicating the relative early stage of some of these businesses — and the market.

If you are looking for investment in this area, there are some VCs who have regularly cropped up over the past couple of years with some are building a portfolio strategy around the ‘content’ opportunity. Two in particular jump out as frequent investors in earlier stages and are good places to call: Lerer Ventures (content marketing investments have included Percolate and Newscred) and Greycroft Partners (Newscred, Nativo, Skimlinks, Buddy Media). 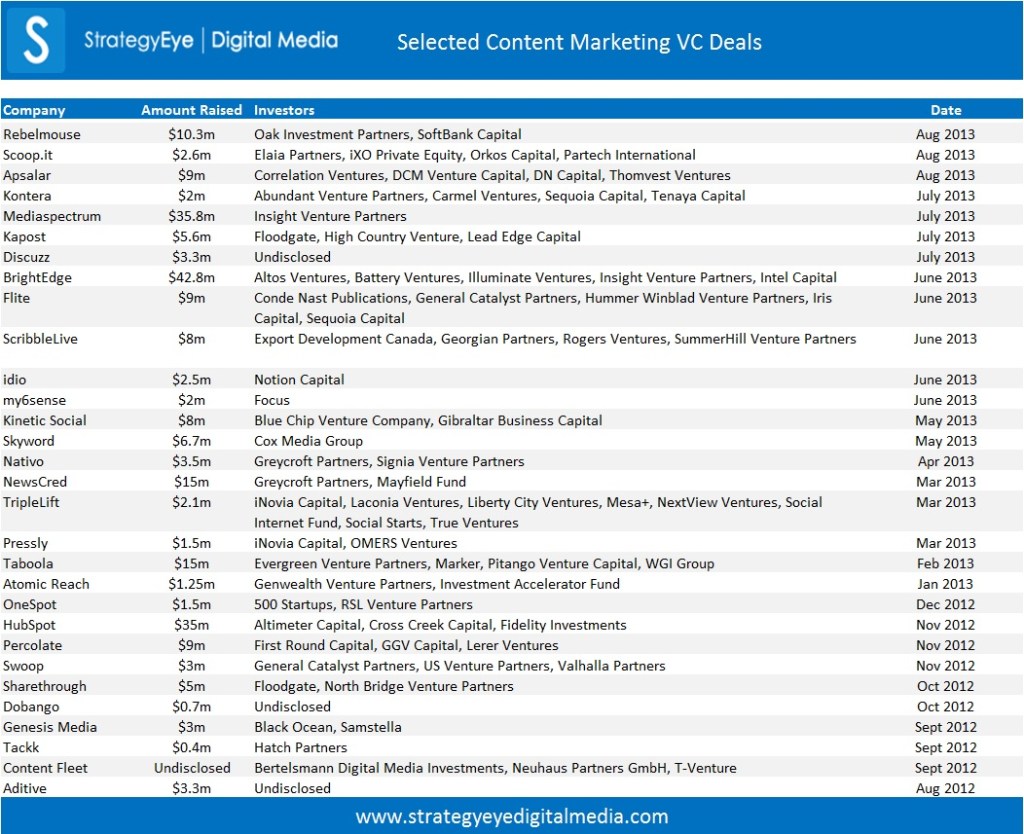 So where has the smart money gone?

Investors are actively targeting the amplification trend within content marketing — particularly where portfolio companies can position their solutions as ‘black boxes’ brokering content in the middle of the ecosystem and just taking a tiny cut of each ‘transaction’ — a truly scalable model.

Arguably the best known names in content amplification are still Outbrain and Taboola who simply sit between content owners or brands and major publisher networks and broker traffic between the two, taking a tiny CPC fee on a vast scale. The backers of both are clearly hoping Google starts to recognise that they have created a new CPC ad model which is starting to encroach on the traditional ad words model — why pay for search keywords if you can have your own clever article headline promoted directly into the page your target viewer is actually reading?

Taboola raised $15 million from Evergreen Venture Partners, Marker, Pitango Venture Capital and WGI Group in February and has an algorithmic engine at the heart of its content distribution platform which is now embracing branded content and moving into video. Outbrain has been well funded for some time ($41 million raised in 2012) and also bought content marketing and editing tools companies, Visual Revenue and Scribit earlier this year – a move allowing it to offer brands and editors tool for creating their own content for distribution via the Outbrain network.

Video networks such as Base79 (which just raised $10 million) and Rightster (planning a rare UK tech IPO) are also now getting in on this act with brokering video content between publishers and publishers – we expect this to be a next phase of growth.

Native advertising has also stepped forward as one new ad solution for the online publishing industry. The premise is simple — a brand creates content which is then delivered via a native ad network into major publishing sites as though it is an editorial article, albeit with a subtle flag as being a sponsored editorial feature. It’s arguably not as scalable as models like Outbrain in that it does require creation of actual content by the client and it also requires integration into multiple different editorial systems — not an easy task — but once these are in place there could be a defensible barrier built.

Investors are looking for disrupters in this space.

Nativo took $3.5 million in April and enables brands to distribute their content (e.g. Intuit creating an article on personal finance) into a series of large publishers. Another example is Sharethrough, which received $5 million in funding from North Bridge Venture Partners and Floodgate in October last year (total funding $11 million). Sharethrough offers a similar service to Nativo, but concentrates on native video advertising, striving to deliver video ads that are in line with publishers’ websites and feel like an extension of their core content. Genesis Media took $3 million in funding and has a similar approach with publishers in its network including Fox and Conde Nast. Triplelift, which received $2.1 million in March this year, approaches it from another angle, with images, rather than video.

Perhaps more of a macro theme than a category, there are increasingly blurred lines between the advertising exchange and content production markets and investors are looking to exploit this — particularly as mobile usage grows. Banner ad backlash and prevalence of ad retargeting has changed the mindset within traditional online advertising. Poor engagement and consumer banner ad blindness were on the increase before mobile became more fundamental, but rising tablet and smartphone usage has brought the banner ad issue into relief.

Banner ads are not built for mobile: the CPM rates are low and they attract a lot of accidental clicks.

We expect convergence of new ad models and content to become a big area for investment in late 2013 as (a) advertising networks have to develop their platforms to be smarter in truly understanding the context of the pages they are delivering advertising into and (b) brands select tools to deliver their own content into pages, especially on mobile, in the guise of ‘editorial’ content or ‘featured article banner ads’ to appear as an authority.

A further example of how content is being promoted directly into ad spots is OneSpot.

OneSpot raised $1.5 million from RSL Venture Partners, 500 Startups and angel backers in December last year. Having started life as a content aggregation platform, it pivoted its business in a bid to take advantage of the branded content boom. OneSpot programmatically turns owned content into glossy advertising ad units (or ‘Spots’) that promote the content – and these are delivered where traditional ads normally would.

As digital advertising campaigns become more measurable, real-time bidding is becoming more significant and is growing at around 60 percent per annum. Investors recognise this and are putting money into ad startups that are part of the real-time bidding ecosystem, particularly when they are involved in either mobile or social media. While real-time bidding has previously relied on cookies and white-lists of good sites, increasingly now brands want to have more contextual knowledge of the pages where their ads are being delivered — both from a reputational perspective but also from analysing how to improve click yield rates.

With this in mind we expect to start to see emergence of “contextual data” companies come on the scene, analysing URLs on behalf of brands and media agencies. These will deliver high volume data points (including context, social popularity, ad clutter, editorial quality) into an ad exchange enabling them to bid higher on those pages most relevant to a brand campaign. Companies such as Peer39, our own EditorEye topic indexing platform, Grapeshot and Crystal Semantics are examples of companies standing in this data flow.

Around the edge of the ecosystem a variety of VC investment continues to pour into B2B content marketing platforms, albeit in relatively modest investments. The startups out there target different areas or niches. Companies like Kapost, ContentFleet, Discuzz, idio, ScribbleLive, Percolate have all received funding with each offering content publishing or delivery solutions as they look to reinvent traditional publishing from different angles.

ScribbleLive, formerly a live blogging platform now offering a real-time news publishing platform used by media companies — it took $8 million to move its platform more firmly into the content marketing space. idio comes from the data analysis side as it analyses a viewer’s profiles and then allows for delivery of much more personalised online or newsletter content. Our own EditorEye indexing platform is used by major publishers as high-frequency curation tool to spot live breaking stories that their writers can curate into articles for their premium publications and is now being used by brands for native advertising.

Cloud content writing services are emerging too as the time to create content is a key pain point for even those who embrace content marketing as a new strategy. Skyword, which took on $6.7 million in May from Cox Media functions as a sort of quasi-marketplace, using freelance writers to help business like IBM create better content.

One of the larger, end-to-end marketing services businesses, HubSpot, took on $35 million in funding last year and aims to cover pretty much all the bases — from enabling easy corporate blogging for lead generation through to social analysis, closing tools and even having a marketplace for writers on-demand.

Another service in the ecosystem is Newscred which took on $15 million in March looking to reinvent syndication. Quietly building up over 2,500 publishers, it takes content from the likes of New York Times, and Reuters and then licenses it to brands such as Toyota or Pepsi to use in full as part of their content marketing mix. Newscred works on the basis that brands would love to reproduce the whole of (say) a Guardian article on their site which saves both their own writing time but also conveys authority by association.

Consumers create and curate on a vast scale already. The success of Instagram, Pinterest and Tumblr is all down to content curation. And companies where content is central to their business are as eager as investors are to take advantage of this. Yahoo paid almost $1 billion for Tumblr — and as it said in a regulatory filing: “The acquisition of Tumblr is expected to bring a significant community of users to the Yahoo network.” Essentially, it was buying consumer eyeballs that were attracted by consumer-generated content in the first place.

Yahoo also bought Snip.it as a curation tool in early 2013 as a foray into promoting content creation by its own audiences – providing yet more eyeball inventory.

More recently RebelMouse raised $10 million in August including from Mike Lazerow who founded social media marketing giant, Buddy Media. RebelMouse is a NYC-based startup that allows users to create web pages integrating updates from social networks – all about the consumer becoming a curator publisher and no doubt ultimately appealing to the large portals to integrate in the future.

Overall, we expect to see investors continue taking a portfolio approach across the broad content marketing categories with a strong wave of M&A set to occur in late 2013 and 2014. Acquisitions will be led by existing marketing automation or CRM companies, major online publishers as well as media-buying agencies as they pick off those software vendors above who demonstrate the first signs of real traction and (preferably) revenues.

Nick Gregg is CEO of StrategyEye which delivers EditorEye (www.editoreye.com) as a hosted content discovery and publishing platform with a unique topic-based indexing approach. EditorEye is used by brands and publishers (including Starcom, Hearst, Haymarket, IPC and Press Association) for powering their content marketing and digital publication strategies. Nick previously led European equity research on the Internet sector at Donaldson, Lufkin & Jenrette (CSFB) and co-founded Milkround Online in 1996. He was also a consultant with Monitor Company and is an investor in a number of technology companies. Contact Nick on Linkedin or follow him on Twitter @nickgregg for perspective on the content market or for information on EditorEye case studies.