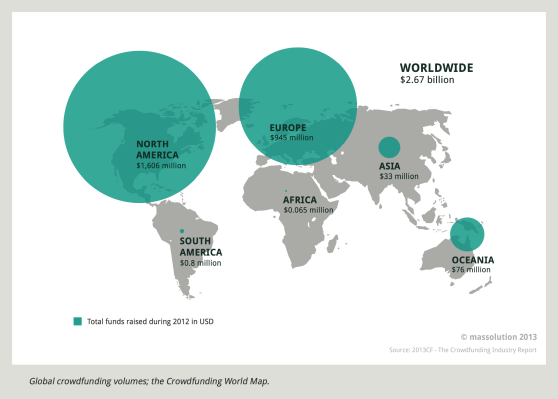 Crowdfunding is getting so much bigger than Kickstarter. Last year alone, it generated 1 million successful campaigns and $2.7 billion across the globe.

Research firm Massolution gathered that data from 308 active crowdfunding platforms (CFPs) worldwide via the website for its 2013 Crowdfunding Industry Report. The information shows that crowdfunding nearly doubled last year, with an 81 percent increase over 2011. North America and Europe, taking second, dominate the market, with a more than 95 percent stake.

Massolution, which specializes in the crowdsourcing and crowdfunding industries, is predicting these figures will reach $5.1 billion this year, with North America contributing 72 percent.

Last year saw significant milestones for crowdfunding. In January, the Elevation Dock became the first to pass $1 million. Then in April, the Pebble smartwatch beat this achievement in only 28 hours, going on to raise $10 million total.

“While lending-, donation-, and reward-based crowdfunding have thus far been leading this global financial revolution, equity-based crowdfunding is about to take center stage in the U.S.,” said Massolution chief executive Carl Esposti in a press release. It’s expected to reach $166 million in 2013, up from $116 million this year.

“The JOBS Act, which will allow non-accredited investors to make investments in exchange for equity, is expected to go into effect by the end of 2013,” said Esposti.

President Obama signed the Jumpstart Our Business Startups (JOBS) Act into law a little over one year ago. It gives regular people the chance to become investors.

This is an “untapped funding source” that will help entrepreneurs who need funding, Massolution analyst and research director Kevin Berg Kartaszewicz-Grell told VentureBeat.

“Crowdfunding offers a great opportunity for everyone to leverage their social networks and transform social capital into financial support,” he said. “Clearly, companies that already make use of distributed networks — such as software developers, media companies, Internet companies, etc. — are in positions of relative strength because the communication networks have already been established, and reaching out via crowdfunding campaigns is thus a natural extension of their networking activities.”

Massolution found that crowdfunding volumes grew 105 percent to $1.6 billion in North America and 65 percent to $945 million in Europe. All other markets expanded close to 125 percent. Most of this growth came from donations (680,000 campaigns) and lending (about 250,000), the latter stemming mainly from crowdfunded microloans and community-driven loans to local small- and medium-sized entities (SMEs), along with the adoption of reward-based campaigns, like those on Kickstarter. 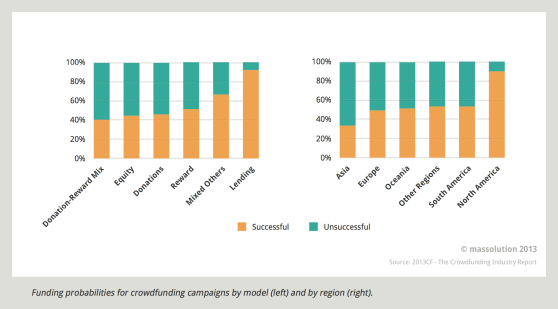 Social causes drive 30 percent of all activity, which Massolution expects to change as more startups and SMEs begin leveraging the platform. The graphic below shows the 10 most active categories by percentage.

Video games were also huge beneficiaries of crowdfunding last year, raising $83 million on Kickstarter alone. Kartaszewicz-Grell said that most game developers would fall under “Software and Smart Apps,” “which is an emerging category I personally expect to see growing rapidly. Software development — especially video games — is a perfect match for crowdfunding because this space has a relatively high portion of its transactions done online and because developers are more used to communicating their state of development via social media.”

Massolution composed its report from survey responses received in the first six weeks of 2013. It was unable to reveal which participating crowdfunding platforms were the most active. 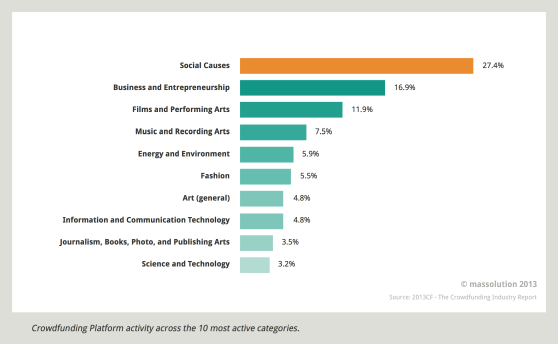