Crowdfunding is the hot new topic in the startup world. Since the passage of regulations allowing companies to source funding from Main Street American investors, startups have been flocking to crowdfunding platforms to secure capital. But what makes a crowdfunding campaign successful? The most obvious answer is a large social following — a crowd of loyal fans that would invest their hard-earned cash in a seemingly great idea. We expected this to be the case, and we analyzed the social media followings of 233 campaigns to find evidence. But while our hypothesis holds some truth, social media may not be as important to crowdfunding success as we initially believed.

According to the crowdfunding law, a company must have a deadline date for reaching its minimum funding target (MFT). The offering is considered closed and not open for further investments after the deadline date is reached. If a company hits its MFT on or before the deadline, it is considered funded. We analyzed all closed campaigns, whether they were funded or not. Of the 233 campaigns, 120 reached their MFT, while 113 were not funded. Our analysis looked at the Twitter, Facebook, and Instagram networks of both groups separately then together. We also considered the LinkedIn accounts of the CEOs to see if a correlation exists between the number of professional connections and the company’s ability to secure funding. A surprisingly anticlimactic trend emerged: Overall, while social media appears to play a positive role in a campaign’s funding, this is only true to a minor extent. The chart below shows the trend line between the funds a company raised and its social following. The trend line shows that while there is a positive correlation between size of social following and raised funds, it holds little significance. 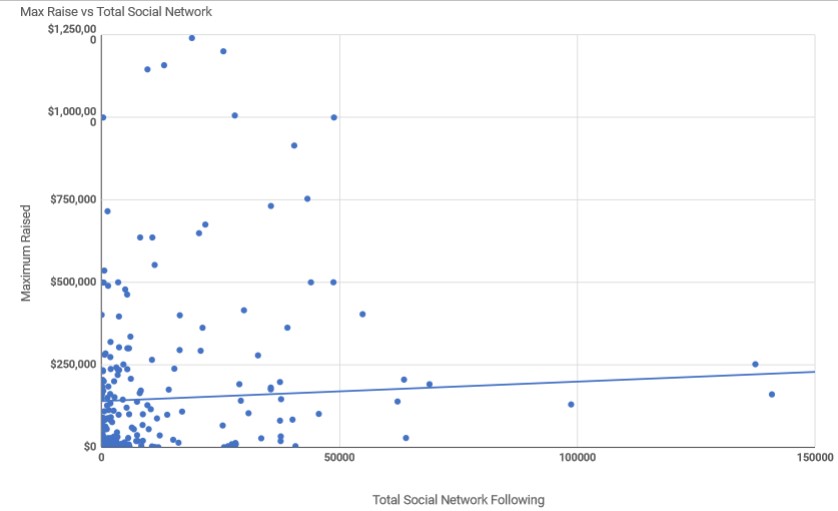 This doesn’t mean social media is a waste of time. In fact, the importance of a social following appears to vary by industry, as shown in chart below with trendlines for different industries. For industries where a social following plays a pivotal role, such as wine and spirits or apparel, the trend is more dramatic than for other industries. The wine and spirits industry appears to maximize the power of a smaller social network. This may be because wine and spirits tends to have a following of loyal fans, particularly when looking at local brands that have a storefront presence. However, for industries that have a technical background and lower social reach, such as transportation and consumer goods, the trend is almost flat or even reversed. The key here is to understand whether your industry is one that attracts followers; if so, you may be able to leverage them for crowdfunding success. If your industry is one that doesn’t attract a crowd, don’t rely on your social following to fund your campaign. 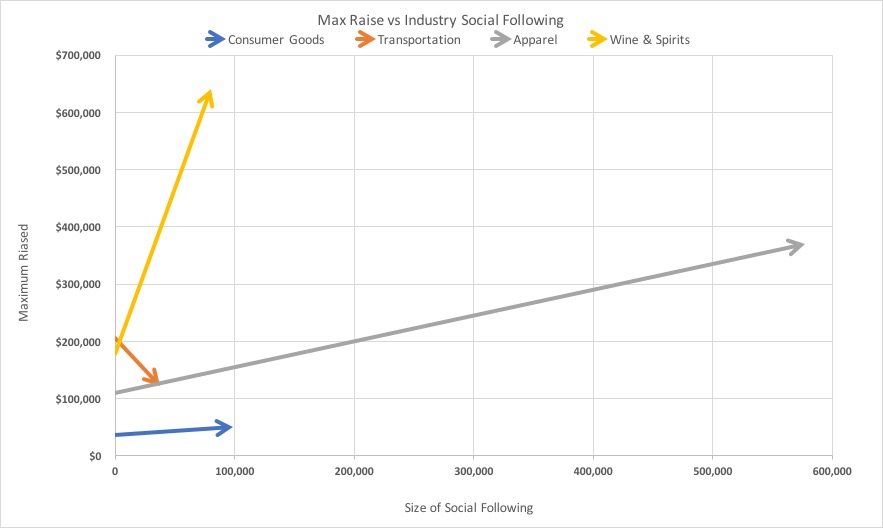 The state you’re based in makes a difference

To date, California and Texas have had the most crowdfunded campaigns. With that in mind, we assessed the importance of a social media following in both states. Our data suggests that a large social network is much more important in California than Texas, as shown below. This may be due to Silicon Valley’s influence in the region. Since there is more competition for venture capital, perhaps companies are leveraging crowdfunding and their social networks to signal popularity and a reason to invest. In Texas, a social following is not a determinant of campaign success. This could be due to a more direct financial approach to crowdfunding in Texas, where investors are searching for proven financial strength instead of social exposure. The implication for startups is that you should understand who you are targeting with your campaign and focus your social media outreach on that. A deeper analysis of other states is in order, but there simply is not enough activity in other states to make a judgement. 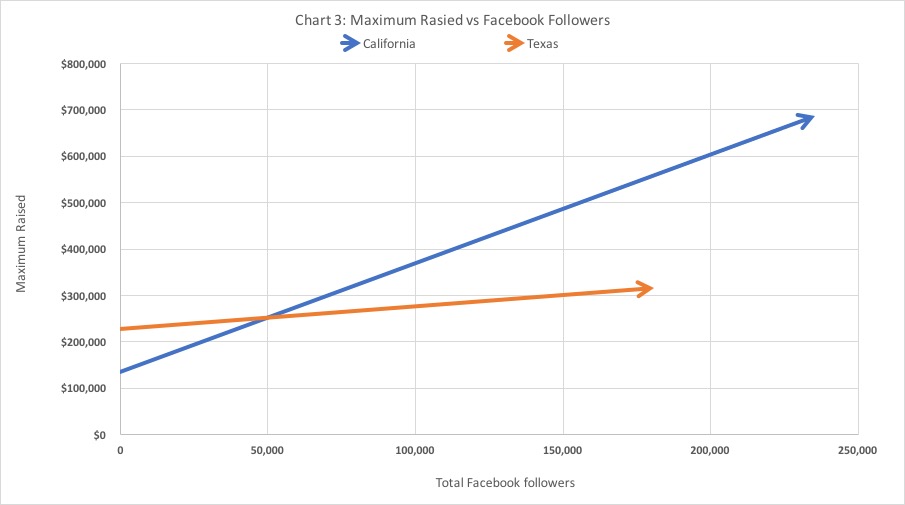 We came across one of the most telling findings when we compared the top 20 campaigns, all of which raised above $500,000, to those that raised precisely zero. The top 20 campaigns had a clear advantage in social media following. On every platform, the top 20 campaigns far exceeded the non-starters in number of followers. It seems almost as if the campaigns that raised no money were intentionally avoiding social media. The chart below displays the total social following for the top 20 and the nonfunded campaigns and suggests that social media plays an essential role on each side of the spectrum. If you want to raise $1,070,000, the most that is permitted by law, you should focus some resources on building a fan base. Beyond these three networks is the LinkedIn following for the CEOs of each startup. As expected the LinkedIn following for the top 20 far exceeded that of the bottom campaigns. On average, the nonfunded campaign CEOs had 32 connections on LinkedIn, while the top 20 CEO’s had 414 connections. This discrepancy suggests that a CEO’s professional network plays a vital role in the start-ups success on crowdfunding platforms. 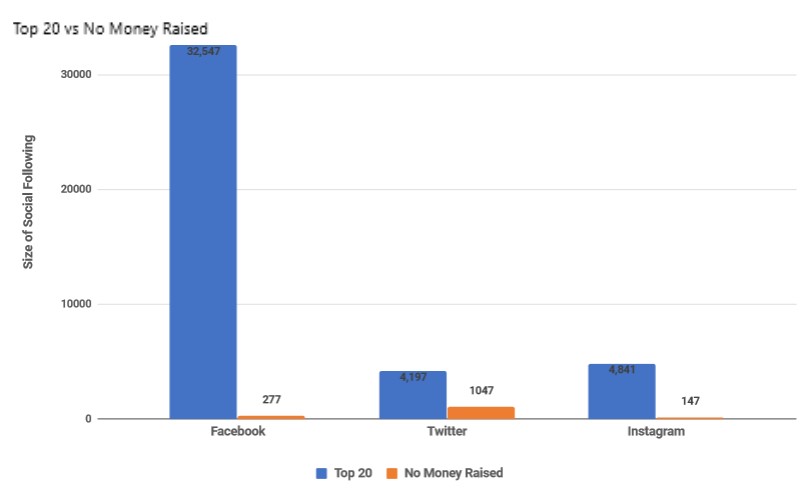 Our data included information for four major social media platforms: Facebook, Twitter, Instagram, and LinkedIn, in order of importance. Each social platform has its own benefits, but the one that stands out in crowdfunding is Facebook. It is almost as if Facebook is the center of a successful campaign. So at a minimum, make sure you have a Facebook presence.

All things considered, the data suggests that the more money a company hopes to raise, the more it should focus on developing a social platform. But results vary by type of industry as well as the type of investor a company hopes to attract. However, companies hoping to raise less than $100,000 may not need to invest as much time on social media and could just use crowdfunding as a tool to speed up funding from pre-existing relationships. Nonetheless, some sort of following is essential, as the campaigns that raised no money demonstrate.

Tyler Monaccio is an analyst at Crowdfund Capital Advisors and is currently working on an MBA with a focus on finance and global affairs.