Don’t swipe right. Don’t swipe left. Just focus on one match, for one day. That is the solution that matchmaking app Once offers to its users to find “the one.”

New York-based app Once told VentureBeat that it received a $3.5 million seed round from Partech Ventures and some private investors to help you find your soulmate by getting away from having multiple dating options.

Once’s model is to send one match to each user at noon. Once you’re paired up, you and your match will see each other at the same time. Each person gets notified when the other person is looking at the profile. And, if both are interested, the app lets you get connected and talk. 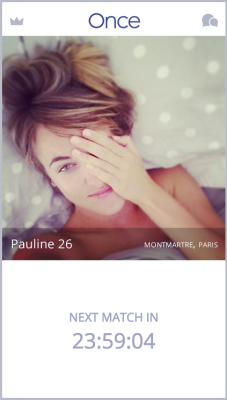 Just imagine… you, looking at the love of your life, and your soulmate looking back at you (cue the imaginary birds, flowers, and soft background music). OK, that might be a bit much. But the point is that neither you nor the other person see anyone else for 24 hours.

That’s a lot of commitment for one dating app. But love is not a marketplace, and some date-listing websites — like Tinder — can get as overwhelming as a shopping trip to the supermarket. With Once, you limit your attention to the prospective partner, or you can just completely ignore the choice and wait for a new one the next day. 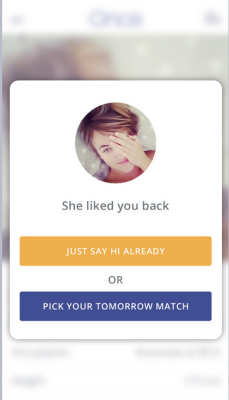 If this sounds very familiar, it is because online love-seekers were introduced in 2012 to a very similar concept by sisters Arum, Dawoon, and Soo Kang in an app call Coffee Meets Bagel (CMB). Both use algorithms to determine who is the best person they can set you up with.

The similarities are not a coincidence. Both apps follow the lead of the South Korean app I-UM, founded in 2010.

However, Jean Meyer, Once’s cofounder and CEO, told VentureBeat that what makes his company different is that there are humans, as opposed to only computers, setting up the matches.

“I believe that computers can do a lot of things right. The only thing that computer can’t do well is the image analysis,” said the Algerian CEO, citing Google’s low point of tagging two African Americans as gorillas.

Once matchmakers put you in a “bucket,” depending on your looks, hobbies, and sexual orientation among other factors (but especially appearance, based on Facebook pictures), and set you up with people who may like you and you may like back.

“If you are not pretty, according to my standard, I’m not gonna like you, no matter what kind of music you like,” said Meyer.

As opposed to CMB, which mainly targets the U.S., and I-UM, which is exclusive to Korea with a version running in East Asia called Hey, Once has presence in 32 countries, accommodates seven languages, and is supported by Android, iOS, and Apple Watch OS.

The app is still new in the market, and some users have posted various reviews complaining about not receiving matches for up to a week. Meyer explained that as more users join, more matches will be made.

Once recently opened offices in Paris, and it is soon opening offices in London. The funds from the round will be used to fuel the company’s growth as well as “very edgy and very different” app features coming by the end of the year. Once’s CEO declined to be more specific.

Meyer also shared that his team is working on an “alpha version for the website” to be released by mid-August, and an Apple Watch OS2 version launching in September or October.