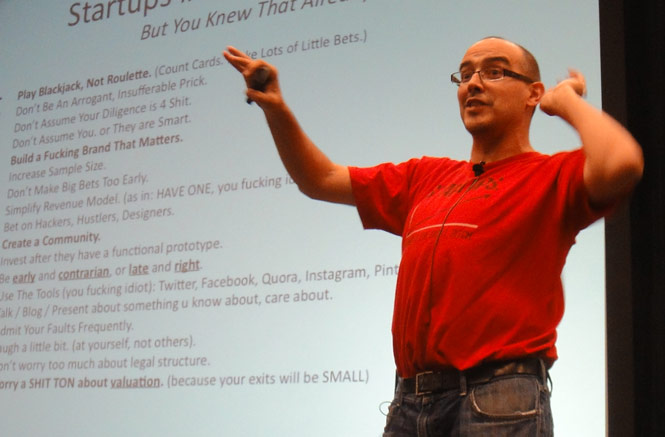 That’s how Dave McClure started his talk today at GROW conference in Vancouver, Canada, where he’s already been busy investing. He’s been doing a lot of speaking in Canada lately, having just recently flipped off Montreal’s tech entrepreneurs.

McClure is focusing internationally this year, in Brazil, India, and Mexico. His incubator program, 500 Startups, recently merged with Mexico’s Mexican.VC.

After starting with typical flair and a warning “there will be lots of swearing,” McClure talked about making venture capital work better and how 500 Startups picks and works with its startups.

The first is not a challenge, apparently: “It’s pretty easy, ’cause most VCs suck balls.”

Rates of returns for VCs are horrible, says McClure. He likes a few, including Sequoia, Union Square, and Andreeson Horowitz, but most do not make money.

500 Startups works differently by making make lots of little bets … as many as 200 investments per fund. McClure wants to be right about 20 percent to 25 percent of the time, but he usually only achieves significant success — $100 million exits — on only 20 percent of its investments.

When looking for new entrepreneurs, 500 startups is looking at up to six different factors:

In addition, when looking at startup teams, McClure wants to see at least three skillsets: hackers, hustlers, and hipsters. Hackers are developers and engineers, hustlers sell and marketer, and hipsters design and build out the user experience.

The shift McClures is seeing (or embodying) is traditional VCs (white guys in suits, apparently) becoming a guild of geeks, mentors, and angels. The legendary PayPal mafia — of which McClure is a card-carrying member — comes to mind.

Entrepreneurs coming to incubators or angels, McClure says, can impress potential investors with trusted referrals (which enable simple due diligence), a functional prototype (which shows that there may be a good team behind the product), and actual revenue (which proves that there’s a market and customers).

Once a company is accepted into an accelerator, it takes a while to sort out winners and losers.

On accelerators: “It’s not sane, it’s not stable. But success emerges not because of you but because of the environment you create.”

“If you have a choice between being a founder or a VC, be a VC. It’s a way better gig.”

“Be early and contrarian or late and right.”