You don’t have to live in Palo Alto to become a software billionaire, though it can help.

For decades, people with ideas, programming talent, and the ambition to make their fortune as entrepreneurs have been moving to Silicon Valley, just as Mark Zuckerberg did shortly after founding Facebook.

But now an increasing number of them are staying at home.

Take, for example, Andrew Mason, the founder of Groupon, who started the company in Chicago in 2008 and kept it right there in the Windy City through its initial public offering in November, 2011.

Or 37signals founders Jason Fried and David Heinemeyer Hansson, who started a web design firm in Chicago in 1999 and kept it there even as the company grew to become a small but influential provider of project management tools and an even more influential blog about effective startup management.

You might think that Chicago was turning into a hive of startup talent, and you’d be right. According to BuiltInChicago.org, the number of digital startups created in the Chicago area in 2011 increased 56 percent over the year before, to 128 new companies.

Even more impressive, the funding raised by those companies was up 431 percent over 2010, to $1.45 billion. Excluding the massive pile of cash that Groupon alone raised ($972 million), Chicago area companies still raised 76 percent more than the year before. 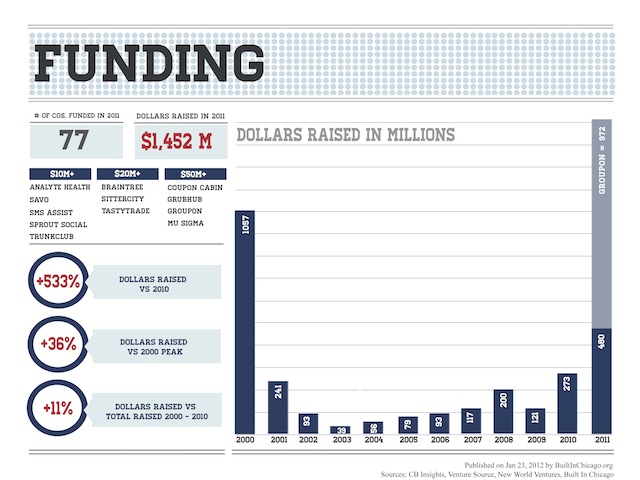 One thing that might be helping is the presence of J.B. Pritzker, a Chicago native who founded New World Ventures in 1996 to invest in technology startups.

Pritzker is a wealthy man, one of the heirs to the Pritzker family fortune, he’s worth an estimated $2.5 billion. He is literally as rich as Rockefeller (David, that is), though that much wealth only qualifies him for a seven-way tie for 159th richest American, according to Forbes.

I had dinner with Pritzker and a group of venture capitalists and journalists recently, where the conversation focused on what it takes to create regional innovation hubs. According to Pritzker, Chicago’s entrepreneurial scene has taken off in the past few years, and it’s not just thanks to the recent success of Groupon’s initial public offering. It’s not just having a rich guy bankroll things, either, though clearly that helps.

Rather, the VCs at that table agreed, what it takes to create a startup ecosystem–whether that’s in Chicago, New York, Salt Lake City, Detroit, or Boulder–is the presence of serial entrepreneurs. Someone has to take that first leap, start a company, recruit talent, and then stick around long enough to do it again.

Serial entrepreneurs can provide capital, by becoming angel investors or even venture capitalists. Their employees form a base of recruitable talent: people who have worked at startups before and understand that the work is not like a job at an ordinary company. Serial entrepreneurs also provide leadership, by serving as an example and as a magnet for talent: Smart people want to hitch their wagons to a rising star, in other words.

In a way, it’s easier to start a company outside Silicon Valley than inside it. Competition for talent is lower, because here in the Bay Area everyone needs engineers, driving their starting salaries into six figures, even for kids just out of college with no significant experience. Elsewhere, you don’t have to pay such rich prices. That may be one reason why Silicon Alley startups are coming up fast.

And, because of the abundant infrastructure provided by the Internet, it’s easy to offshore jobs that you can’t get done locally. Need more designers or more engineers? Turn to India, or the Philippines, or Romania.

Still, not everyone is convinced. I talked with Verdi Ergun, a cofounder of point-of-sale system startup Own, which recently moved from Ann Arbor, Michigan to San Francisco.

“We went from being a big fish in a small pond to a small fish in a big pond,” Ergun told me. “We hit this point where we needed more access to engineers and more access to capital, given the stage that we were at.”

Own’s prospects for success will be very dependent on the company’s ability to form partnerships with other tech and social networking companies, many of which are in California, so the move makes sense strategically as well.

But for an increasing number of companies, you don’t have to make it here: You can make it anywhere.

Note: As part of our global DEMO tour, VentureBeat will be traveling to Chicago on February 27th, where we’ll be partnering with one of the city’s top incubators, Sandbox Industries, to find the best startups in town. If you’d like to meet with us, please fill out this form, and we will be in touch shortly with more details.