Spoiler alert for early stage growth companies: If you do not have a business plan that will allow you to reach profitability/scalability with current capital, then get ready for the Mike Tyson punch in the face that is coming in 2016.

Mike Tyson’s quote, “Everyone Has a Plan Until They Are Punched in the Face,” never rang true for me until the 2008 financial crisis. As a hedge fund PM who was in the distinct minority of actually running a hedged book (i.e. flat net exposure with shorts offsetting longs), I always did well when the market swooned as my short gains tended to more than offset the losses from my longs. In late 2008, however, post the Lehman bankruptcy, I took the equivalent of a lethal combo of Mike Tyson upper cuts to the face. I then realized I didn’t have a well thought out plan. I had a plan for a choppy market or down market. But I didn’t have a plan for what to do in a serious bear market so I waited and took the punches. I finally cried uncle when the pain was too much and I went to cash. I was knocked out by not having what I refer to as a “what if” plan. The “what if” plan accounts for the black swan scenario where markets freefall, people panic, and rationale leaves the building.

Early stage companies better dust off their plans and make sure they include downside scenarios because they are coming in 2016. I don’t portend to know how 2016 will turn out but I can tell that already fundraising has tightened. Deals are taking longer to put together and investors, both VCs and angels, are becoming much more selective.

Assume this Round is your Last One
Far too many companies are built to get to the next lily pad, i.e. the next round. The startup that has bootstrapped the business to scale and built a self-funding, profitable entity is a black swan.
Because startup funding has been plentiful up till now, modern day fundraising has morphed into a frog getting across a pond where the company is solely focused on reaching the next lily pad. Startups haven’t needed to focus on becoming a viable, standalone entity. Unfortunately, if the next lily pad drifts away these fledgling companies will find themselves with an unsustainable business model that can’t possibly survive without dramatic cuts in headcount and/or infrastructure.

Different stages represent varying priorities but there must always be an underlying focus of creating a self-standing entity without further funding.

The current strategy of seed companies is to raise a round to get sales and infrastructure ramped to growth mode. Making money is not central, rather it’s contrary to “what investors want” as it takes away from growth. Losing money or “burn rate” are worn like badges of honor. If you asked the operators if they would have ramped up headcount so fast if they were personally responsible for funding the business, they would likely respond “absolutely not”.

Sand Hill East recently had one company that we invested in that executed perfectly according to the ‘get seed funding playbook’. But when it came time to raise Series A funding, the lily pad moved and the sector was out of favor. They hadn’t built a self-standing company so their options were incredibly limited. The company was subsequently sold.

Looking at the shakiness in the US equity markets and the slowdown in funding (both in terms of numbers and anecdotally) has me concerned for my portfolio companies. In Q4, based on Pitchbook data, the number of rounds closed was the lowest it’s been since Q3 2011. 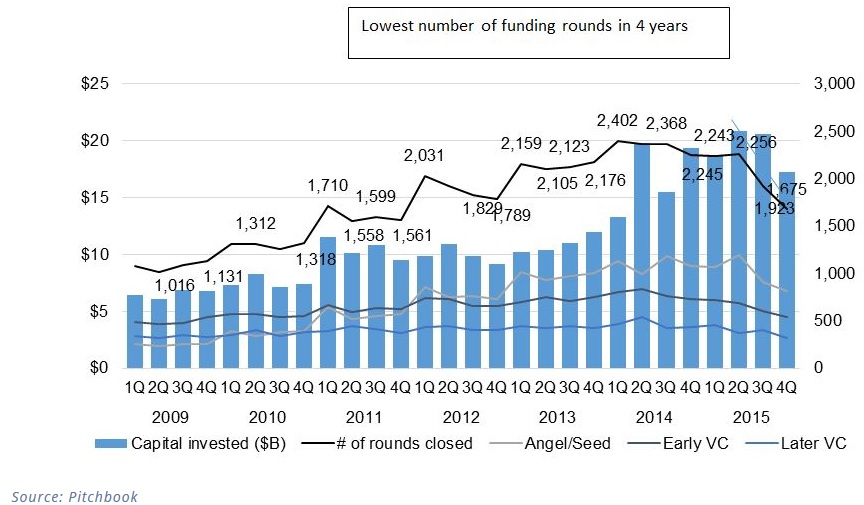 Seed companies are going to find it especially tough to raise rounds as there is investor fatigue from angels. In addition, the recent stock market turbulence, that increasingly reminds me of 2008, has/will make hedge fund and financial services people much less willing to write $25k and $50k checks. 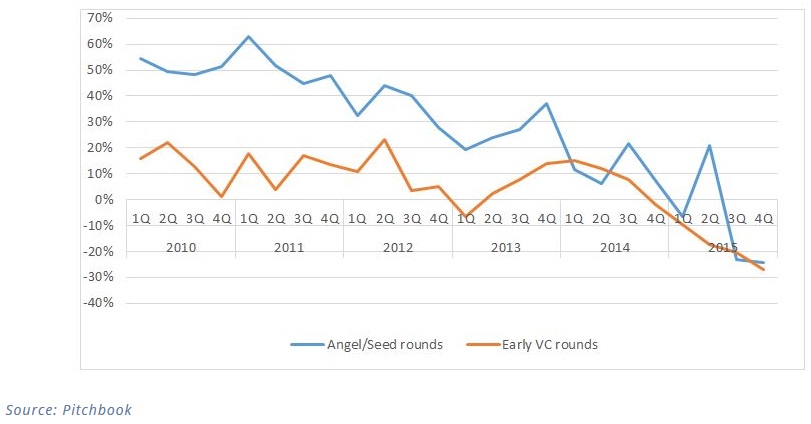 The technology battering on Friday, led by Linked In dropping 44% or $11 billion in market cap and Tableau dropping 50%, will also filter through to the early stage rounds. The result is a valuation compression for mature high growth companies. Tableau’s growth decelerated from 50% to a projected 30% year over year in 2016 and the result was a multiple compression taking its Enterprise Value (Market cap minus net cash) to revenue multiple from 6x to 2.6x current projected revenue. Tableau’s guide down for 2016 hit the entire SaaS space, causing broad damage — Hubspot -20%, Workday -16%, Salesforce -13%, Atlassian -16%, etc.

If you don’t think the high growth SaaS valuation compression effects the terms in which early stage, high growth by definition, companies raise money then be prepared for a Mike Tyson punch in the face in the not too distant future by the market.

So my advice to startups is, be the Black Swan:

In closing, dust off those business plans and take another hard look at how you will get to revenue and manage your expenses — build your company with a pragmatic view of how you will get through a downside scenario.

Josh Burwick is a managing partner at Sand Hill East Ventures. He previously managed technology portfolios at Moore Capital, Pia Capital, and GLG Partners and worked at Goldman Sachs in the technology sector for the Investment Research and Institutional Research Sales departments. He blogs at http://sandhilleast.net/blog.html, and you can follow him on Twitter: @jburwick.