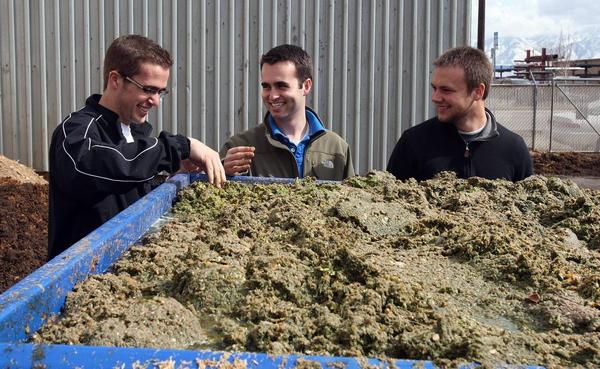 It’s hardly a secret that Americans not only consume massive amounts of food everywhere but also throw massive amounts away. Fortunately, a scrappy startup called EcoScraps is doing its part to remedy one of these problems. The company announced today that it has raised $1.5 million in its first round of funding, which will enable the team to expand operations into more stores and regions across the United States.

The concept behind EcoScraps is simple: The company takes leftover food from retail stores, turns it into compost, and sells it. This approach solves multiple problems. It takes a wasted resource and transforms it into something useful, it provides an environmentally friendly alternative to chemical fertilizers, and it helps reduce the damage that rotting food in landfills has on the earth’s ecosystem.

The impact that vehicle and industrial emissions have on the atmosphere is well known, as is the methane output of livestock. However, the USDA found that roughly 30 million tons (over a quarter of America’s food) is thrown away every year. Furthermore, this waste generates around 8-9% of pollution in the US, following closely on the heels of car pollution at 12%. As if this wasn’t enough, the EPA estimates that it costs around $1 billion a year to dispose of all this waste.

Before shelling out for a Prius, it’s wise to pay closer attention to how much food you throw in the trash. This does not mean eating all of it (obesity is whole other barrel of fish) but rather only buying what you can consume. Founder Dan Blake was inspired to build the company when he realized his eyes were bigger than his stomach.

“I was student who just finished finals and decided to treat myself to an all-you-can-eat French toast buffet,” he said in an interview. “I went back for seconds, filled up my plate, and realized I was no longer hungry, so I threw it all away. When I looked in the trash can, it was filled up. I was surprised about how wasteful I was, and also how wasteful everyone else was.”

Blake delved deeper into the issue and saw a potential business opportunity. He started dumpster diving and experimented with creating nutrient-rich organic fertilizer from wasted food. Once he had the whole composting thing down, he began approaching big box retailers to form partnerships. A cold call to Costco yielded a pilot program where a Costco store gave EcoScraps all its leftovers, EcoScraps turned it into compost, then EcoScraps sold it back to Costco to sell in the garden department. This is the ultimate, closed loop transaction. Corporations are actually paying for their own garbage. Brilliant.

The company currently collects food from 96 different stores. Its products are for sale in over 400 retailers, including Costco, Home Depot, and local and independent grocery stores, nurseries, and garden centers. EcoScraps mostly works in Utah, Arizona, Colorado, and California but will use the recent funding to expand nationally. Dan also wants to open up additional markets and facilities and broaden the product line to include dry fertilizers, liquid composts, and potted soil.

The money came from KickStart Seed Fund, DBL Investors, and Peterson Ventures. EcoScraps is based in Utah and has 34 employees. Its compost facilities receive 100 tons of food waste everyday. That’s a lot of uneaten hot dogs.