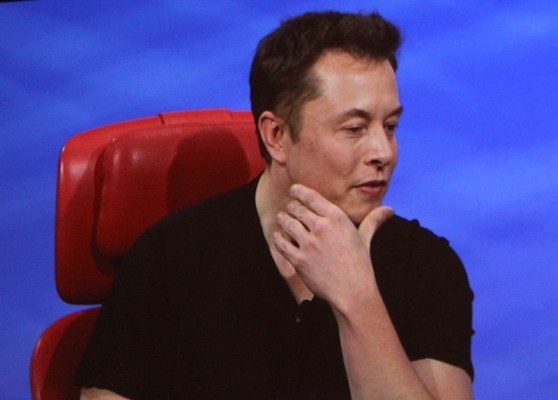 One thing about Elon Musk: He doesn’t entertain small ideas.

Today he talked about reinventing the automobile, exploring space, reinventing high speed rail, the possibility of inventing a warp drive, and putting a permanent human colony on Mars.

This is not just the pot-fueled speculations of your college roommate, either: Musk is making actual progress toward every one of these goals. (Well, maybe not the warp drive.) He laid out some of his dreams and projects here at D11, a tech conference put on by All Things D.

His talk was extremely well-received by the audience. After a day and a half of listening to media and social networking executives make hollow, cautiously-guarded, nearly content-free remarks about the future direction of their companies, Musk came across as a visionary leader who actually knows what the hell he’s doing and isn’t afraid to say what he thinks.

Investor and entrepreneur Shervin Pishevar, during the Q&A session, credited Musk with bringing some of the passion and vision that the conference attendees used to get from the late Apple founder Steve Jobs.

Other comments from the D11 twitter feed were similar: “An absolute visionary.” “Not even Kryptonite could slow him down.” “I’m in total awe.” “Totally blown away.”

What makes Musk stand out, apart from his unembarrassed smarts, is that he’s focused on making a huge difference. Or differences.

“When I was in college I wanted to be involved in things that would change the world,” Musk said early on in his talk. There were three things that he was interested in: the Internet, sustainable energy, and space exploration with the goal of making life multiplanetary.

After helping create PayPal and sell it to eBay (for $1.5 billion in 2002), he felt that he’d made a pretty big difference in the Internet arena — plus, a lot of other entrepreneurs were focused on that. So he turned his attention to the other two big arenas.

Musk plowed his fortune into new ventures. One was Tesla Motors, a company that aims to make electric cars into a viable commercial alternative.

“Almost all people regarded it as stupid or insane or both,” Musk said. The track record for upstart auto makers is not good.

“If I had a dollar for every time someone mentioned Delorean or Tucker, there would be no need for an IPO.”

But he wanted to make electric cars because, he saw no major automobile manufacturers were going to do it. He made that leap after seeing what happened to General Motors’ EV-1, a much-loved electric car that GM canceled after California repealed a law mandating carmakers put a certain number of electric vehicles on the road. GM recalled all the EV-1s it had leased to customers and crushed every one of them, prompting some customers to hold a candlelight vigil.

“I think that should be a pretty big wakeup call, if people are holding a candlelight vigil for your product,” Musk said.

Tesla proved them all wrong and is now shipping Tesla Model S cars in volume for about $70,000 apiece (or about $60,000 after government subsidies).

Another big bet for Musk was SpaceX, which is trying to advance space technologies. Musk put $100 million of his own money into the company as early as 2002.

The company’s goal, he said,  is to establish a permanent human colony on Mars and make life multiplanetary. But for that to become a reality, humanity needs to make progress in space exploration every year. SpaceX is designed to make that progress.

Why go to Mars?

“We want to have a future where we’re out there exploring the stars,” Musk said. “If we don’t improve space technology every year, we’re never going to get there.

“The goal of SpaceX is to make as much improvement as possible.”

What’s needed most immediately is a rocket that’s rapidly and cheaply reusable, since the vast majority of a rocket’s cost is in the rocket itself, not its fuel. If you can refuel a rocket, you can save a lot of money — and launch a lot more rockets. SpaceX hasn’t achieved that yet, but it has brought down the cost of building a rocket substantially.

“When we started SpaceX, I thought the most likely outcome was that we would fail,” Musk said.

The point at which he realized it could possibly work: When the company analyzed the materials cost of a rocket, which amounted to just a few percent of the overall cost. “So clearly people were doing something silly in how they put those materials together.”

“So just by eliminating those foolish things, we were able to make a rocket for much less,” Musk said.

What about warp drives?

“It is theoretically possible to warp spacetime itself, so you’re not actually moving faster than the speed of light, but it’s actually space that’s moving,” he said.

But, he acknowledged,  “A warp drive may or may not come to fruition.”

Why settle on Mars? Apart from the fact that Mercury and Venus are too hot, it’s reasonably amenable to human habitation: It’s colder than Earth, but it’s within a range you could conceivably inhabit. Plus, it has a very thin atmosphere, and if you augmented that, you could make it more livable.

“You could warm Mars up, over time, with greenhouse gases,” Musk said.

“Mars is a fixer-upper of a planet, but we could make it work.”

Where innovation comes from

Musk had one piece of advice for entrepreneurs:

“I’d advise that people consider arenas outside the Internet.”

There’s a lot of opportunity in other industries, especially ones that have been dominated by a monopoly or oligarchy.

“Innovation comes from new entrants. When an industry has had an absence of new entrants, then it has a lack of innovation,” and that opens up opportunities for new players to come in and shake things up.

The Internet, by contrast, is already very well-saturated with startups, to the point where “innovation” starts to mean tiny, incremental things like animated GIFs and photos that self-destruct after viewing.

Finally, after prompted by a question from Pishevar, Musk said a few words about his idea for a “hyperloop,” which he proposed recently as an alternative to the High Speed Rail project in California — which, Musk says, “if built, will be the slowest bullet train in the world at the highest cost per mile.”

Musk wouldn’t say much about the Hyperloop or describe it in detail. He did offer this intriguing analogy, however:

“It’s a cross between a Concorde, a railgun, and an air hockey table.”

“Even if I’m wrong about the economic assumptions behind the hyperloop, it would be a really fun ride,” Musk said.