Building any company is hard, but building a biotech company is particularly hard. Not only do biotech companies have significant inherent costs due to lab space, DNA, and reagents purchase, but the life cycles of the organisms in question limit product development speed. Hardware companies faced similar problems until Kickstarter came along, but reward crowdfunding has had limited impact on biotech companies.

We are already seeing the potential: The top two Title III equity campaigns by dollars raised so far (out of more than 30 which have launched) are focused on biology (Beta Bionics and my company, Taxa Biotechnologies).

Why Kickstarter doesn’t work for biotech

As creator of one of the first Kickstarter campaigns for a synthetic biology application, the Glowing Plant project, I can attest first hand to the challenges biotech projects face in reward crowdfunding. There’s an inherent tension between promising rewards and the challenges and uncertainties of biological research. Quite rightly, we were criticized by the scientific community for promising something we hadn’t done yet (which isn’t how science is done). However, the challenge is that bio businesses need the funding upfront – especially in biotech, where once you’ve made the product you need very little capital to manufacture and ship it; biology scales through reproduction. As any biologist will tell you there are always unknowns with this kind of research. Compounding this, many biotech products have some degree of regulatory approval required, introducing further uncertainty into the process. It’s not possible to crowdfund something that needs regulatory approval because you may not get it and therefore you may not be able to offer the product as a reward.

Hardware startups have the inverse problem: Prototyping is relatively cheap and easy thanks to all the tools available now, but scaling manufacturing is hard and capital intensive. That’s where Kickstarter’s pre-orders model was so transformative, with companies selling millions of dollars worth of pre-orders in a few weeks.

While plenty of hardware crowdfunding projects have failed, the risk is much more manageable and can be mitigated with capital and experience. With biotechnology there are always unknown risks due to the inherent complexities of biological systems, and equity is therefore a much better instrument to handle this risk than the promise of a reward based on the successful outcome from the research.

Why we need new funding mechanisms

It’s no secret that existing funding mechanisms for early stage biotech companies are a challenge. The big pools of capital are roughly split between pharma drug investment and tech investment (which mostly means software). Traditional biotech venture capitalists understand the technology, but their core value add is in assessing FDA risk and having the rolodex to sell companies that pass clinical trials to big pharma, skills not required for the next generation of biotech companies. These companies are building products that avoid long regulatory processes and are often much more capital efficient. Tech VCs on the other hand, who are making tentative steps into the area, understand the potential caused by the underlying exponential technology trends but don’t understand and therefore avoid the technical risks implicit in all biotech ventures.

Between these groups lies a new industry that everyone recognizes has disruptive potential but which is currently starved for capital. Title III equity crowdfunding can fill this gap. In addition, the social value of many biotech companies – better food, more sustainable materials, new medicine, etc. – provides a unique double pitch to potential investors who know they are making a risky investment but can get the satisfaction of supporting a good cause as well as the potential of a big return.

We need distributed ownership of this technology

One of the principle complaints from the anti-GMO crowd, rightly, is that the benefits of genetic engineering technology are being captured by mega-corporations, not by the public. Title III equity crowdfunding provides a platform for democratizing access to the returns from these technologies while bringing transparency to a field bedeviled by claims of secrecy and corporate misdemeanor. Furthermore, we see a positive feedback loop that can develop, turning consumers into shareholders into evangelists and principled stakeholders in these new technologies.

Bio apps could become as easy to make as mobile apps

The next few years are going to be an exciting time for the biotech industry. The underlying technologies – DNA sequencing, DNA synthesis, and lab automation – are progressing exponentially fast and faster than Moore’s law: 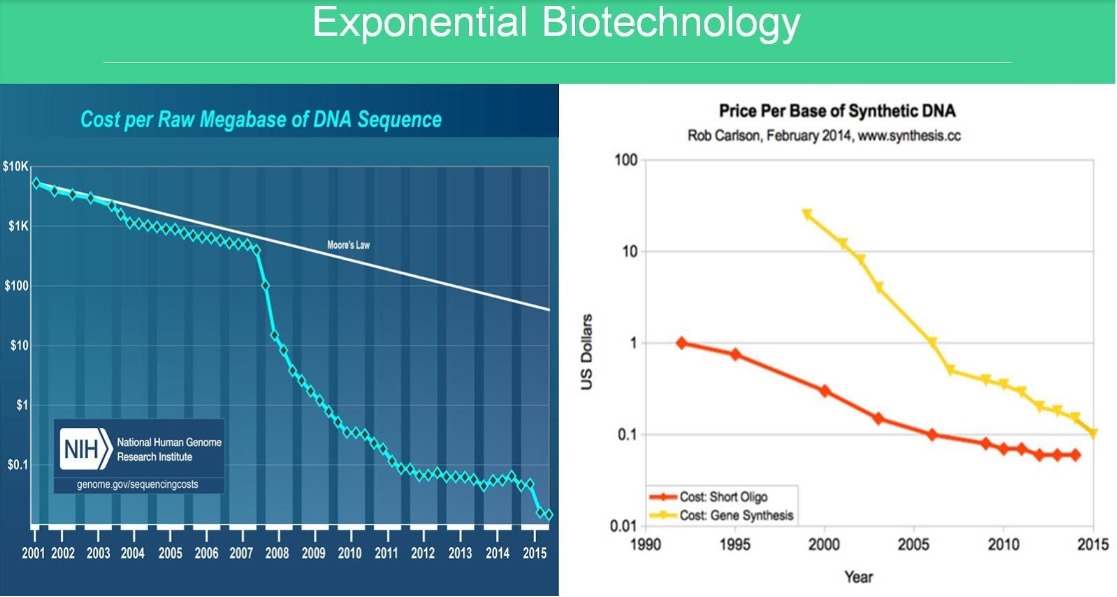 Combining this technology advancement with new sources of fundraising from equity crowdfunding has the potential to unleash a wave of creativity and innovation in which biological apps become as easy to make as mobile apps are today. We can only begin to imagine the possibilities of what people will create today.

Antony Evans is founder and CEO of Taxa Biotechnologies where he focuses on the non-technical aspects of the business, including business development, marketing, fundraising, external communication and regulation. Prior to Taxa he lead the Glowing Plant Kickstarter campaign, led product development for the world’s first pure mobile microfinance bank in the Philippines, and launched a mobile app in partnership with Harvard Medical School that has over 250,000 downloads. He previously worked for six years as a management consultant and project manager at Oliver Wyman and Bain & Company.