MessageBird, a European Twilio rival that says it bootstrapped its way to profitabilty early on, has raised its first notable equity financing via a $60 million series A round led by Accel, with participation from London-based Atomico and Y Combinator.

Founded out of Amsterdam in 2011, MessageBird had until now only received a small $120,000 “seed” investment as part of its participation in the Y Combinator accelerator program last year. Today’s announcement heralds one of the biggest ever series A investments in a European software startup — though it still lags behind that of U.K.-based payments company Powa, which raised a $76 million series A round four years ago before eventually going bust last year.

While there are some differences between MessageBird and Twilio, the two are broadly similar insofar as they both offer developers and companies a cloud-based communications platform that enables them to bring chat and messaging functionality to their own products through APIs (application programming interfaces). By combining software, cloud, and APIs, this approach circumvents the need for costly hardware infrastructure, and makes it more cost-effective for companies to introduce text- and voice-based features to their own services.

MessageBird hasn’t grabbed the same kinds of headlines as its San Francisco counterpart Twilio, which was founded in 2008 and finally went public on the New York Stock Exchange (NYSE) last June after raising more than $230 million in funding.

While Twilio and MessageBird are competitors, the former has a significant head start in the U.S., a market the latter is now targeting for growth. So, did Twilio’s IPO last year raise a broader interest in the sector?

“It definitely raised awareness in the U.S. of the cloud communications space as a whole,” explained MessageBird founder and CEO Robert Vis, in an interview with VentureBeat. “The uptake we saw was mainly from large enterprises wanting to reach their customers in the greatest possible number of geographies around the world available today.”

So far, MessageBird has offered a chat API for integrating messaging services such as Telegram, Messenger, WeChat, and Line into third-party apps or websites. Its messaging API powers SMS-based in-app communications and it’s also working on a video API that’s currently in the final stages of beta testing. With another $60 million in the bank, MessageBird is today officially launching its voice API — which has already been available for several weeks in beta — to allow businesses to build voice calling into their own services. This is similar to what Twilio has offered for many years already.

“We’ve already built the world’s largest and most reliable text message API service for enterprises; now we are raising capital from the two leading investors in Silicon Valley and Europe to expand our voice infrastructure and sell our services into the enterprise market,” said Vis. 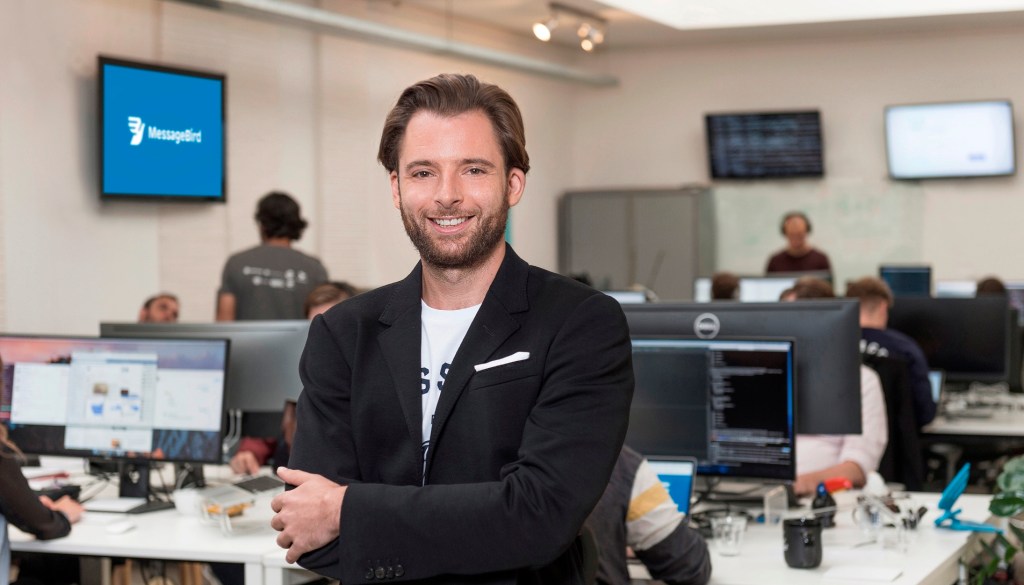 For a company that specializes in cloud-based communications, the delay in offering a voice API seems like a huge omission on the surface. Surely, this has significantly hindered MessageBird’s growth so far?

“In our case, we saw customers using us for SMS and just not using us for voice because we didn’t offer it before,” said Vis. “The need for the voice API really is driven by our customers, who wanted us to provide the same global security and cost advantages on voice that we have been doing for SMS for some time now. We are now able to leverage our direct carrier connections on voice as well as SMS. Being bootstrapped teaches you to focus on where the most growth is coming from, and up to now that has always been our SMS products. But the need from our customers was clear — so we built it.”

MessageBird claims it has been profitable since its inception and said that it’s on course to hit a $100 million revenue run rate this year. That is pretty impressive. By way of comparison, Twilio had raised north of $100 million in outside funding by the time it was reporting a $100 million run rate in 2014, and this came shortly before it raised an additional $130 million.

MessageBird said that it already counts 15,000 customers globally, including DoorDash, SAP, Huawei, Amber Alert, and Heineken. One particularly notable name in its roster is Uber, which Twilio has long claimed as a client of its own. But Twilio recently revealed that Uber was reducing its dependency on Twilio’s technology, a move that caused Twilio’s stock to nosedive.

Anyone who’s ever used Uber will likely take for granted the app’s speedy messaging functionality. You’ll also note that it’s possible to chat verbally with a driver through the app, rather than having to share telephone numbers manually over SMS.

“The magic of using cloud communications to power this interaction is that both customer and rider are automatically provided with a virtual number, which means both sides of the call are anonymized,” noted Vis. “Driver and customer never see each other’s real number.”

With tens of millions of users globally, such a system requires a reliable infrastructure, and it’s much easier — even for heavily funded companies such as Uber — to outsource some of these service, rather than building it all in-house.

“We work with large companies that cannot afford compromised communications,” continued Vis. “The quality of your communications is a direct reflection on the caliber of your business. If you’re on a sales call and that connection is poor, you won’t close the deal. Dropped calls result in missed opportunities and lost business.”

Another key facet of MessageBird’s business is its carrier partnerships, and the company claims 220 direct carrier integrations globally. With its own telecommunications carrier infrastructure, MessageBird can “connect to the very core of mobile carriers,” according to Vis. This effectively bypasses legacy systems that may involve multiple players and which may not be reliable. Generally speaking, the more entities involved in getting a message from A to B, the more likely there will be delays or failures. One analogy Vis used to describe its setup is the game “telephone” (or “Chinese whispers” as its known elsewhere), whereby a message is whispered into one person’s ear and then passed along to the next person until the last player in the group repeats a message that is unrecognizable to the initial whisper.

“The same holds true for communications,” said Vis. “Because of our direct carrier connections, MessageBird is essentially whispering in the last person’s ear, bypassing all the people in the middle. Other companies go through all those extra hoops, and as a result security is compromised, quality is diminished, and speed is slowed — and now imagine you had to pay all those people who passed along the message. That is what happens in communications.”

One interesting facet of MessageBird’s recent past is its participation in the American seed-stage accelerator program, Y Combinator (YC). Though MessageBird was technically a seed-stage company in terms of funding, YC is generally geared toward early-stage startups — not companies that are already generating millions in revenue. So what was the story behind the YC tie-up?

“We were growing so fast that it afforded us a moment to reflect and fine-tune our vision as to where we wanted to go as a company,” Vis said. “It also provided us with a huge network of portfolio companies we saw as potential customers in the U.S. market. The way I look at YC, it’s more like Harvard for founders, where they really drill you on focus and basics that apply to companies at any stage.”

One specific learning that Vis gleaned from his company’s involvement with YC was a mantra stipulating that “growth” is about retaining customers, not just acquiring them. “It seems really logical, but it changed the way we looked at customer success, and we increased our revenue expansion rate from 140 percent prior to YC to 170 percent after it,” he said. “I’m a huge advocate for companies joining YC at any stage, especially larger companies outside of the U.S. wanting to enter the U.S. market.”

MessageBird now lays claim to the biggest-ever series A investment for a Y Combinator company.

“While many companies have significant traction when they enter YC, MessageBird was one of the largest companies by revenue to ever complete the program,” added Y Combinator partner Ali Rowghani.

The future, according to MessageBird

Today, MessageBird has offices in its native Amsterdam, as well as in San Francisco, Singapore, and Sydney. In addition to funding its push into voice, the company said it will use its fresh cash bounty to fund new hires, including in customer support, and to consider acquisition options in the U.S., Europe, and Asia.

One luxury of being a self-funded startup is that you don’t have to worry about exits — being acquired or going public doesn’t matter if you’re getting customers and garnering revenue. While this funding helps MessageBird scale in key markets such as the U.S., doesn’t it also give them an extra problem to worry about?

“We specifically chose investors who have a long-term vision and will not put pressure on us to think about this [exiting] for a while,” said Vis. “It happens to be that both investors just raised their investment funds, so we are good for the next 10 years to not have to worry about this. It’s also super early days for the cloud communication space. This is such a large market — that is still dominated by incumbents — that there will be enough time to grow significantly.”