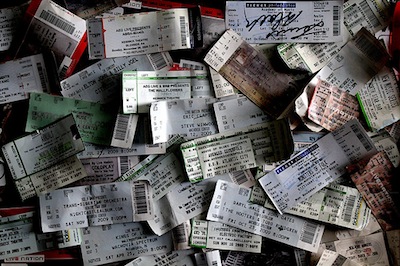 Ticketing startup Eventbrite announced today that it has raised $50 million to finance its growing ambitions in the ticketing market.

The San Francisco company started out aiming for a different audience than existing ticketing giant Ticketmaster, offering an easy way for small event organizers to sell tickets. My most common usage of Eventbrite has been for tech conferences and meetups. But the company has turned its focus to larger events, and last summer it sold 60,000 tickets for a Black Eyed Peas concert — its largest event ever, according to The New York Times.

Eventbrite says that with the new funding, it will continue to aim for bigger events, build more analytics and social media tools, and invest in its mobile products. In addition to established companies like Ticketmaster, Eventbrite is competing with newer startups like Ticketfly.

More than 10 million people have attended events ticketed by Eventbrite, and it’s on-track to process nearly $500 million in ticket sales this year, the company says. The new round was led by Tiger Global Management and brings Eventbrite’s total funding to $79.5 million. Past investors include Sequoia Capital, DAG Ventures, and Tenaya Capital.