Facebook ($FB) announced on Wednesday fourth quarter earnings, generating $8.81 billion in revenue and an earnings per share of $1.41.

By comparison, Wall Street analysts had expected the social networking company to pull in $8.51 billion in revenue and an EPS of $1.31.

“Our mission to connect the world is more important now than ever,” said Mark Zuckerberg, Facebook founder and CEO. “Our business did well in 2016, but we have a lot of work ahead to help bring people together.”

Shares in Facebook closed the day up 2.23 percent at $133.23. It’s currently up more than 2 percent in after-hours trading after beating expectations. 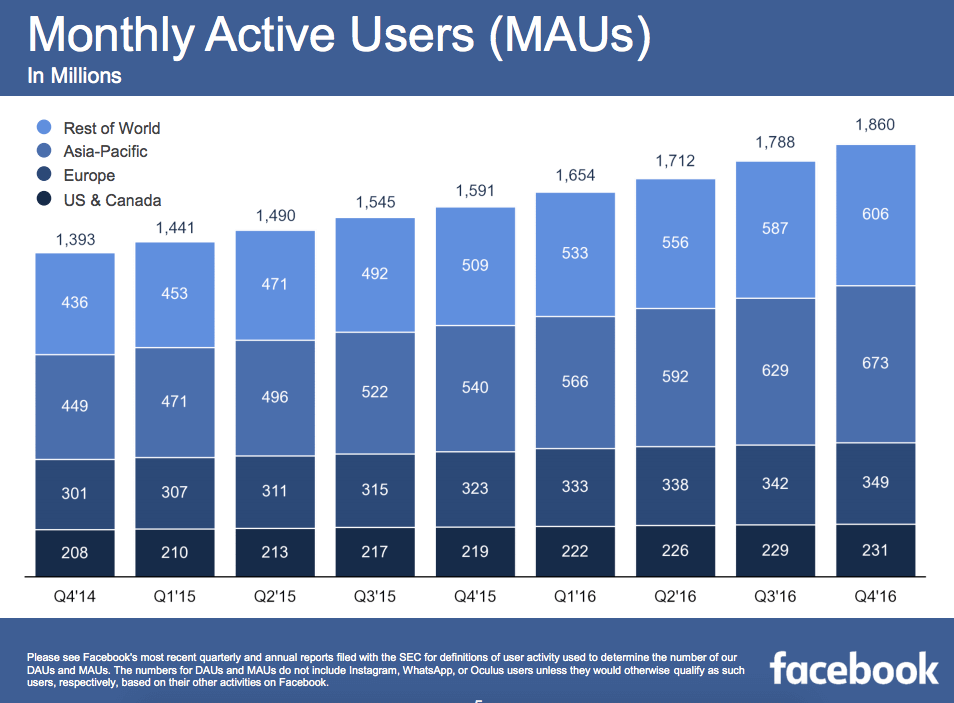 This past summer, Facebook chief financial officer Dave Wehner remarked that the total number of ads that would be shown to each user would be a “relative non-factor” for predicting Facebook’s future revenue growth within a year. In the next quarter, investors were warned that ad revenue growth would also slow down in 2017. There has been some activity around how to combat this potential deceleration, including looking at opening up more advertising opportunities within Facebook Messenger and maybe even on TV.

In today’s earnings report, Facebook revealed a sharp uptick in advertising revenue, bringing in $8.6 billion, a 53 percent spike. The portion attributed to payments and other fees dropped 12 percent to $180 million. As has become a recurring pattern, most of the ad revenue came from mobile, accounting for 84 percent, up 4 points from Q4 2015. 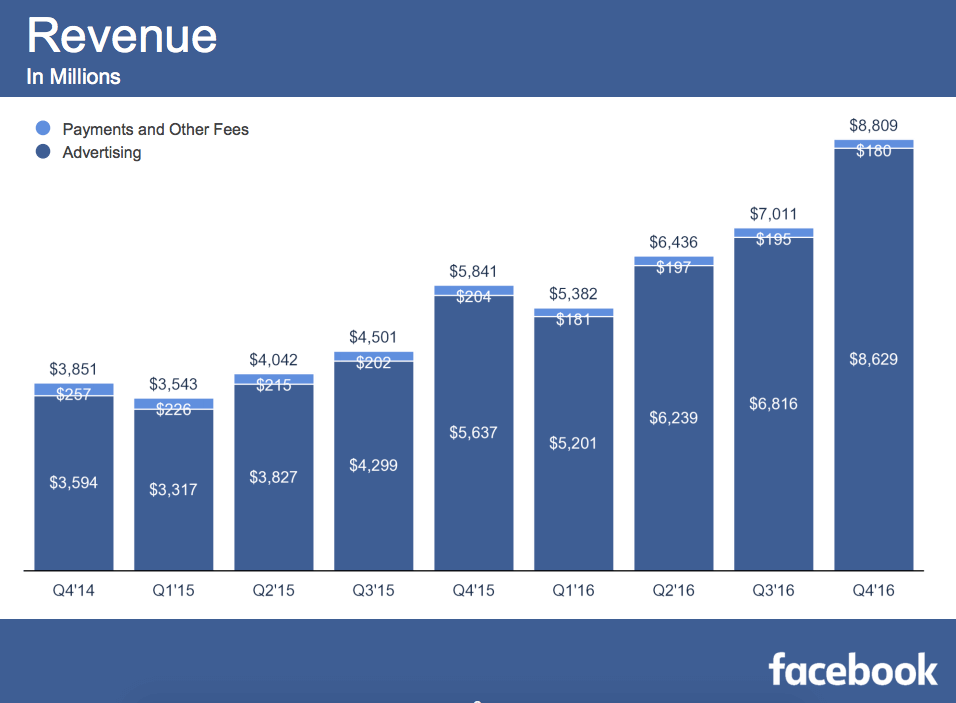 Facebook’s earnings come days from what’s expected to be Snap’s filing to be listed as a public company. There certainly has been no love lost between these two businesses, with Facebook copying some of the best features that the ephemeral messaging app has to offer and adding them into Instagram, Facebook Messenger, WhatsApp, and the social network itself.

Will today’s quarterly results dampen the spirits of some investors, causing some speculation as to where marketing dollars and investments should be made?

Once again, Facebook did not break out any revenue or stats for Instagram, seen by some as a major player that will impact Snap’s performance.

And to make Facebook’s earnings more interesting, minutes before the company announced its results, a judge concluded a lawsuit between Oculus and ZeniMax in which the latter was awarded $500 million in a case where it was alleged that Oculus misappropriated trade secrets before its acquisition by Facebook. A jury declared no misappropriation was made, but said Oculus cofounder Palmer Luckey violated a non-disclosure agreement.

It will be worth hearing to see if Zuckerberg responds to the ruling during Facebook’s earnings call later today.