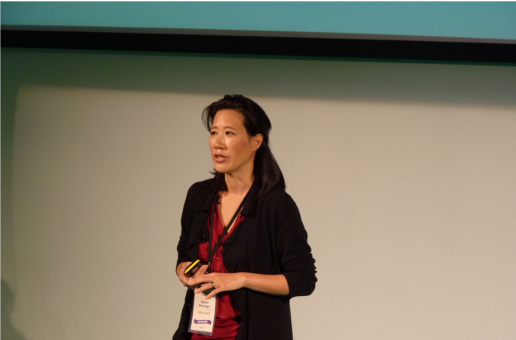 There’s nothing better than a true story, well told – and Eileen Burbidge’s first public talk about her experiences as the third employee at Skype definitely made that definition.

Appearing late on Friday at IdeaLab! 2012, Burbidge – now a partner at London-based Passion Capital – stood poised and spoke quickly and frankly. “It’s going to be like therapy,” she joked, kicking off her take on what it was like to be part of Skype’s close-knit, eccentric first team, in all its good, bad and exhilarating detail…

Let’s start at the start

In 2004, Burbidge – then Eileen Broch – moved from the US to London to join the Skype team. It was a narrow decision, with a job offer at Shazam, at the time better funded and with more employees, as the opportunity cost.

To some, the Skype offer wouldn’t have looked so good. There was no official title, Burbidge says, and no employment contract, office or job description. She didn’t even think she’d use the voice product personally – as a self-described geek, she was much happier with IM and emails.

But Skype had Niklas Zennström and Janus Friis, who had previously founded music sharing site Kazaa. Kazaa wasn’t a commercial success but it had radically transformed its industry (and, Burbidge added, culture at large).

“So I thought, these guys, they did that once, they’re not going to go do something totally pedestrian now,” she said. “They clearly want to prove something. Maybe that’s something I want to be part of…”

And hey, even if there was no real contract, her cost of living would be covered. “Another anecdote is that I was actually unpaid for eight months but I just kept doing it. I look now and – what was I thinking? But it was so great to be there, I just knew I was never going to starve, I’m never going to go hungry. If I need to, I’ll hit Niklas up for something. It’ll work out.” (In the end, she said, she had to hand in her resignation and force a showdown on the airport tarmac before Zennström got round to it.)

The Skype family gathered for a board meeting in Tallinn, circa July 2004 (who’s who)

On her first day relocating to London, she took a red eye flight, landed and went to the hotel to shower, thinking she’d head into the Skype base and surprise her new colleagues. They called her, right before she hit the shower, to ask when she’d be in.

“In that very first day, I thought – I don’t know if I’m good enough to be here, if I can pull this off,” she said. “That never went away. I think that’s what made it great. It’s what made me better than I would have been otherwise. That’s what made everybody really good.”

The team, she said, were “killer smart”, witty and – looking back – a little insecure, just enough to give a feeling of “we can’t screw this up; we can’t let each other down.”

“Everybody worked their asses off, 24/7,” she said. “We used our own product, we all used Skype chat… I’m not kidding, I would leave my laptop open even when I went to sleep, and the first thing I did was scroll back in group chats to see what I missed.”

Skype’s Estonian development team played a big part in shaping the work culture. With English as a second language, there was little room for small talk:

“You’d be like ‘how’s it going, how was your day’ – I have Skype histories that say this – and the response I’d get from Tallinn was ‘ask’. One sentence. One word. They didn’t mean that to be rude, it was like ‘I don’t have a lot of these small talk words, ask me what you came to ask me’ – but that actually helped us get a lot more done.”

As part of her role as product manager, she worked to bridge the teams in London and Tallinn. “There was already communication breakdown the week that I got there,” she said. “They were calling each other ‘us’ and ‘them’ and at risk of not being the same team.”

“Fake it until you make it” – the night before launching Skype 1.0 and SkypeOut

“Fake it until you make it”

In the very early days of Skype, “we faked a lot of it,” Burbidge said. Before launching SkypeOut, for example, the team stayed up all night with spreadsheets trying to figure out what country to country landline charges should be.

Rather than push back the launch date, Burbidge said, they ended up just making it up. “Now, obviously, that’s a little bit foolhardy – I wouldn’t recommend anybody do this – but my point is, we didn’t over-analyse.”

Everyone on the team “worked their asses off to make sure Niklas wasn’t disappointed in them”, she said, despite his personal eccentricities, including that he’d sometimes email ten times a night for days. “He’s extremely visionary. He had that singular focus.” (Zennström is pictured left, dressed as a pirate at a Skype costume party).

He was greedy, she said, in a good way – as shown when he and Friis sued Skype’s first acquirer eBay and some of the company’s original investors to regain control of the company, before selling it again to Microsoft for $8billion. “You don’t do that unless there’s something really driving you. He really wanted to see this become a billion dollar company more than once. He wanted to be a part of that.”

She described Toivo Annus (right), the head of Skype’s development team in Tallinn, as the tactical counterpart to Zennström’s vision:

“He would schedule things to bits. He would pound people. He was crazy smart… Literally yelled at people ‘sit’. He would just order them around to get organized and get things done. I slowly realized, he doesn’t mean this personally, he’s not actually trying to threaten people, it’s like ‘let’s just not waste time’. He’s painfully direct.”

Also, she added, he’s the “single best person I know at hiring teams”, sending her out to meet people to set up a recruitment for Skype three years in advance.

It doesn’t sound like everyone’s idea of an ideal working environment – constant contact and no formal contract, at least not to start with – but Burbidge made it clear the team became like family:

“The oldest person on the Tallinn team was 34, the oldest person in London was Niklas at 37, most everyone else was in their twenties and I was considered ‘old’ at 33… No one in London had kids (only Niklas initially was married), and so we worked together all day, sometimes all night, but then also socialized and went out together at night too.”

Entrepreneurship is like sex or giving birth, Burbudge told the would-be founders in the crowd – reading and talking about it is nothing compared to actually experiencing it. And, she concluded, you definitely don’t need to be top dog:

“If you believe in what you’re doing and the team that you’re working with, that’s the most important thing. You definitely don’t need to be the lead… I could have been CEO or founder of a million startups and not got anywhere near what I got from being at Skype.

“My advice is, don’t necessarily go out and found your own business right away. Go work with some really, really, really smart people, who you’re afraid are going to realize you’re not as smart as you think you are. Try and do something with them. Screw it up a couple of times so you know what that feels like. Have some successes so you know how good that feels, so that you’re driven to do it again. Then go do your own company.”