Fantasy sports firm FanDuel has made its first-ever acquisition, which comes less than a week after it announced a whopping $275 million funding round.

Kotikan, a mobile app developer based in Edinburgh, Scotland, revealed it had been bought by FanDuel for an undisclosed amount, and will dedicate its entire resources to building fantasy sports apps for FanDuel.

Founded in 2009, FanDuel is a daily fantasy sports provider that offers a myriad of one-day game options for the NFL, MLB, NBA, and NHL. FanDuel is now an official partner of the NBA, which holds an equity stake in the company, but FanDuel also has deals in place with specific NFL and NBA teams. It claimed more than a million paying gamers and $57 million in revenue in 2014.

FanDuel has emerged as one of Scotland’s biggest tech company exports, and it’s notable insofar as the product is built entirely in Scotland, but for customers based entirely in the U.S. and Canada. The company has raised north of $360 million since its inception, and although it still has an office in Edinburgh, its headquarters are now located in New York. 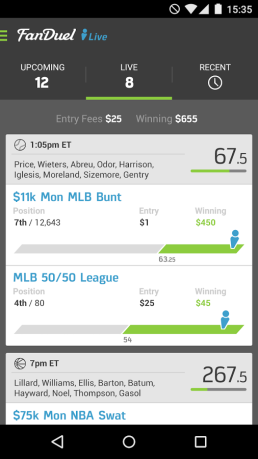 Kotikan isn’t particularly well-known outside its native Scotland, but it claims $3.7 million in revenue a year, and has built apps for another Scottish tech titan, Skyscanner, which is one of the world’s biggest flight search engines.

Perhaps more pertinent here, however, is Kotikan’s existing relationship with FanDuel — Kotikan has been building apps for the games company since 2013. So today’s deal is effectively an acqui-hire — FanDuel is buying developers who already know what the company is all about.

“The closer we worked together, the more we wanted to contribute to FanDuel’s success,” explains Kotikan founder Gav Dutch in a blog post. “Eventually we realised the best way to do this was to devote the entire Kotikan team to crafting FanDuel products.”

This is a notable exit for a Scottish company, and was clearly aided by the startups’ relationship, which goes back long before they started working with each other.

Other noteworthy tech company exits to emerge from Scotland recently include Stirling-based OneDrum, which was snapped up by Yammer in 2012, prior to Microsoft’s acquisition of Yammer. And last April, an audio chip giant was born when Cirrus Logic acquired Wolfson Microelectronics for $467 million — Wolfson was founded in Edinburgh in 1984, and made audio chips for Samsung Galaxy handsets.

FanDuel has been on a major hiring spree of late, taking on 38 former Zynga employees back in May, and now another 56 today. It now has 243 staff across the U.K. and the U.S., and plans to hire more software engineers before the year is out.