Pelvic floor muscles may not be the sexiest topic, but they are crucial to a woman’s sexual health and well-being. Kegel exercises, which help maintain these muscles, certainly aren’t new, but Elvie has found a way to make them slightly more amusing by developing a kegel tracker that connects wirelessly to an app. The London-based startup announced today that is has raised an additional $6 million in funding.

Pelvic floor problems, such as urinary incontinence, can occur when the pelvic floor muscles are stretched, weakened, or too tight. Although women can experience this at an early age, it’s usually more common after certain life stages, such as pregnancy, childbirth, and menopause.

“When healthy and toned, the pelvic floor is vital as it lifts and holds your core and abs, assists with bladder control, and contributes to sexual satisfaction,” wrote CEO and cofounder Tania Boler, in an email to VentureBeat. Elvie’s other cofounder, Alexander Asseily, is one of Jawbone’s founders.

Elvie’s product is a pod-like kegel tracker made out of silicone that women insert in their vaginas. “It is intimate technology,” wrote Boler. “A bit like a Fitbit for your lady bits!” The force and motion sensors measure pelvic floor muscle movements as the woman exercises by squeezing it. The tracker connects to the Elvie app via bluetooth (on both iOS and Android) and allows users to visualize the exercises in real time. “As you squeeze your pelvic floor muscles, a gem on the app lifts,” wrote Boler. “The stronger your squeeze, the higher the gem lifts.” 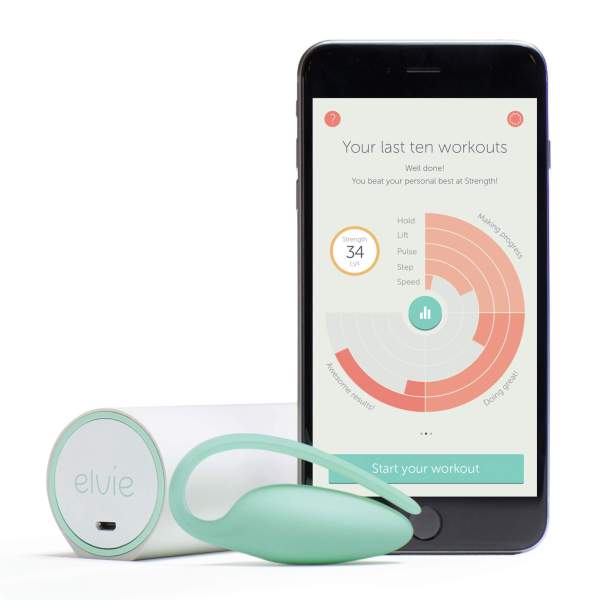 Above: Elvie’s kegel tracker and app

The startup claims to have worked with doctors and physiotherapists to create personalized training programs, as well as with data scientists who are working to optimize the training regimen for each user.

Elvie’s kegel tracker costs $200 — it is sold on Elvie’s website, Amazon, John Lewis, Goop, and Violet Grey and is currently being sold in 59 markets. Customers include actresses January Jones and Gwyneth Paltrow, as well as reality TV star Khloé Kardashian. According to Boler, health and wellness spaces are recommending the product, including the Portland Hospital in the U.K. and Mount Sinai in the U.S.

Elvie categorizes itself as part of the femtech market, which is expanding in both the U.S. and the U.K. Some people, however, are still skeptical about the space — something Boler has struggled with. “Too often, ‘women’s issues’ are neglected or not taken seriously,” she wrote. “I’ve had so many people tell me that pelvic floor issues are too ‘niche’. How can the experiences of half of women be called niche?”

In terms of investments, Boler argues that even though investors are beginning to take this sector seriously, Series A investments are typically lower for women’s connected health devices than for the health space in general. Other European-based femtech startups — like Clue in Germany and Natural Cycles in Sweden — are getting considerable funding, but these are digital only, not wearables.

Boler sees the potential of wearables for women, however, and is banking on it 100 percent. “Most of wearable tech for women has focused on aesthetic changes like turning a tracker into a piece of jewelry or changing its color,” she wrote. “These are okay at one level but the potential of connected devices to radically improve the health and happiness of women is massively under-exploited.”

Octopus Ventures led today’s round, with participation from the female-focused VC firm AllBright. Previous investors include Google Maps founder Lars Rasmussen and other angel investors. This brings Elvie’s total raised since it was founded in 2013 to $8.6 million.

The new money will be used to expand into 25 additional countries across the U.S., Europe, and Asia. A second device will also be launched by the end of this year.