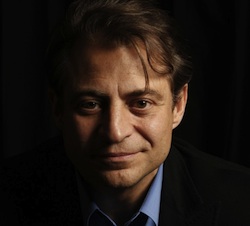 We are all unknowingly addicts. Addicts of bad news.  Twenty-four hours a day, seven days a week, the news media is feeding us negative stories on every digital device in their arsenal: mobile phones, tablets, computers, radio, television, and newsfeeds. Every murder, terrorist plot, economic downturn, no matter how remote, is brought to us live, over and over again.

The reason for this is simple. Our brains are hardwired to pay far more attention to negative news than to positive stories. Millions of years ago, as our brains were evolving, if we missed a piece of good news, it was an inconvenience.
But missing a piece of bad news could mean the end of your life. For that reason, we’ve developed portions of our brain that are constantly scanning for bad news and thereafter putting us on high alert. The old newspaper adage “If it bleeds, it leads” is as true today as it was a century ago.

So it’s no wonder that people think the world is falling apart, and many are in a very dark mood. But what is curious about this situation is that in nearly every measurable way, the world is much better off than it has ever been.

I’ll start with poverty, which has declined more the in the past 50 years than the previous 500. Over the past 50 years, while the population on Earth has doubled, the average per capita income around the world (adjusted for inflation) has tripled.

We’re not just richer than ever before, we’re healthier as well. In the last century, maternal mortality has decreased by 90 percent and child mortality by 99 percent, while the length of the average human lifespan has more than doubled.

As Harvard professor Steven Pinker has made clear, since the Middle Ages, violence on Earth has been in constant decline. Homicide rates are a hundred-fold less than they were when they peaked 500 years ago. So we’re not only healthier, we’re safer as well.

If your measure of prosperity is tilted toward the availability of goods and services, consider that even the poorest American’s today (those below the poverty line) have access to phones, toilets, running water, air conditioning, and maybe even a car. Go back 150 years and the wealthiest robber barons couldn’t have hoped for such wealth.

Even more impressive are the vast array of tools and services now disguised as free mobile apps that this same Maasai warrior can access: a GPS locator, video teleconferencing hardware and software, an HD video camera, a camera, stereo system, and vast libraries of books, films, games, and music. Go back 20 years and add the cost of these goods and services together—and you’ll get a total well in excess of a million dollars. Today, all these devices come standard with most smartphones.

During the last two decades, we have witnessed a technological acceleration unlike anything the world has ever seen. Exponential progress in artificial intelligence, robotics, infinite computing, ubiquitous broadband networks, digital manufacturing, nanomaterials, and synthetic biology, among many others, put us on track to make greater gains in the next two decades than we have had in the previous 200 years. We will soon have the capability to meet and exceed the basic needs of every man, woman, and child on the planet. Abundance for all is within our grasp.

But it won’t happen without your help. While accelerating technology is an awesome force, it’s not enough to bring on a golden age. However, three additional forces are emerging—and this is exactly where you come in.

The second of these forces is the rise of the Do-It-Yourself (DIY) innovator. No longer content with hot rods and homebrew computers, DIYers (working both in small teams or collectively, via crowdsourcing) have made major contributions to fields like healthcare, energy, education, water, and freedom—areas that were once the sole province of large corporations and governments. This means that whatever challenges we face in the world—climate change, AIDS in Africa, energy poverty—more than ever before, we are now empowered to individually help solve these problems. And it’s our ability to do so, this newfound power of the maverick DIYer, that is the second of our four forces.

The same technologies that enabled the rise of the DIY Innovator have also created wealth much faster than ever before. Tech entrepreneurs such as Jeff Skoll (eBay), Elon Musk (PayPal), Bill Gates (Microsoft) became billionaires by reinventing industries before the age of 35. Maintaining their appetite for the big and bold, they are now turning their attention and considerable resources toward bettering the world, becoming a new breed of philanthropist—technophilanthropists—and, as such, yet another force for abundance.

Perhaps the most significant change of the next decade will be the dramatic increase in worldwide connectivity via the Internet. The online community is projected to grow from 2 billion people in 2010 to 5 billion by 2020. Three billion new minds are about to join the global brain trust. What will they dream? What will they discover? What will they invent?  These are minds that the rest of society has never had access to before, and their collective economic and creative boost becomes our final force: the power of “the rising billion.”

We are living in a time of unprecedented opportunity.

So while I can’t tell you to ignore all the negative news coming your way, I can say that the future, much like the present, is going to be a whole lot better than you think.

This post is written by Singularity University Cofounder and Chairman Peter Diamandis. The university, founded in 2008 and based at the NASA Research Center in Mountain View, California, aims to assemble, educate, and inspire a new generation of thinkers, scientists, and business executives looking to better the world through disruptive technologies.