News of this surfaced last month, and with it, Foursquare reportedly cut its valuation by more than half from $650 million (an unconfirmed figure) to $250 million (also unconfirmed by VentureBeat).

What we didn’t know — and this is the real meat of today’s announcement — is that Foursquare founder Dennis Crowley is out as CEO; he’s now executive chairman. Replacing Crowley is the company’s chief operating officer Jeff Glueck, former Skyfire CEO and Travelocity CMO, who joined Foursquare in 2014.

In a call with VentureBeat, Foursquare wouldn’t comment on the rumored $250 million valuation, but Glueck offered soft confirmation of the smaller valuation, saying “the company is now being looked at not on hype from 2009 or 2010 but on real business momentum.” In other words, the roughly $600 million valuation in Foursquare’s past was “hype.” Let’s go ahead and scrap the $900 million Yahoo reportedly considered paying for the company last year.

It’s hard to view this news in a positive light without key bits of information we’re not privy to: long-term revenue figures, growth projections, and burn rate. It’s startling to see Crowley resign as CEO after more than six years. Does Foursquare remain a ripe acquisition target? We’re left with many questions unanswered.

I asked Crowley how he thinks the industry and media should react to the announcements, and he said, “This is like the best possible sign that we could give people. We’ve got this business that’s performing very well, and we’re taking the two strongest business executives at the company and we’re putting them in charge.”

Update 1:55 p.m. PT: Foursquare tells us the raise was not contingent on Crowley stepping down. 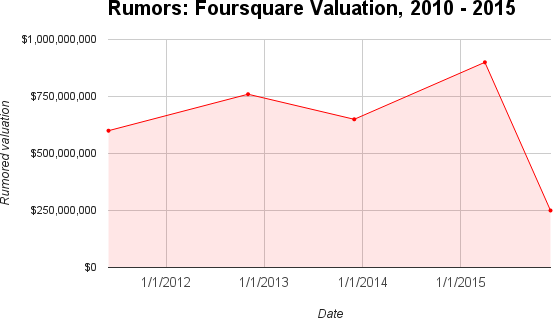