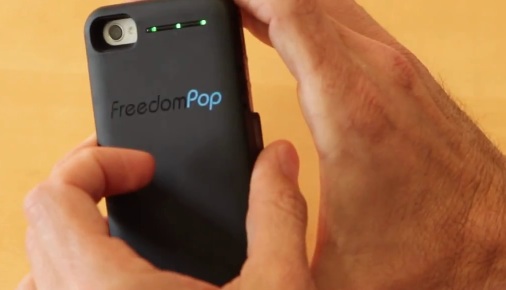 The seemingly mythical FreedomPop, which aims to disrupt the mobile broadband landscape by offering a freemium 4G service, is one step closer to reality. The company has raised $7.5 million in a first round of funding, led by ManGrove and DCM, VentureBeat has learned.

FreedomPop plans to file its Form D documents for the round tomorrow, which will show a $4.5 million investment from ManGrove and DCM. The remaining $3 million will show as a future traunch.

The brainchild of Skype cofounder Niklas Zennstrom, FreedomPop has gained quite a bit of attention because it aims to do the impossible: provide free and low-cost 4G broadband that’s supported by additional services. As large wireless carriers are happy to charge you more for faster wireless, FreedomPop could stand to gain from frustrated consumers. And if the company plays its cards right, it could end up replacing home broadband access for some.

FreedomPop aims to deliver its service across several devices, including an iPhone case (which effectively acts as a hotspot), a USB stick, and a wireless hotspot, according to our past reports. They’ll all be powered by 4G WiMax service from ClearWire and an unnamed wireless carrier. The company plans to start beta testing this Summer, and it just recently put its iPhone case up for preorder for $99.

We initially heard that FreedomPop was going to offer 1GB of free service monthly, with every additional gigabyte available for just $10. But according to a recent TechCrunch report, it looks like the company is now aiming for a safer 500MB of free service. The company also plans to offer innovative ways for users to gain free bandwidth by signing up their friends.

ManGrove and DCM will join existing investor Atomico, which was cofounded by Zennstrom.