In an effort to try to distinguish itself from other accelerators in the Bay Area, 500 Startups has been offering two different programs since last year: Seed and Series A. Today, the 500 team announced the launch of its first Series A program in the Middle East and North Africa (MENA) region, and provided VentureBeat an exclusive overview on why it chose Doha, Qatar to run the three-month program.

Nine MENA startups from countries that include Egypt, Kuwait, Bahrain, Qatar, and the United Arab Emirates (UAE) were invited to participate in the program, which launched on April 30 and ends on July 30. The startups, which include Ghinwa, a Snapchat for singing; Meddy, a Yelp for doctors; and Souq Al Mal, a marketplace for financial and insurance products, were coached and mentored by ten 500 Startups partners and mentors who flew to Doha from Silicon Valley for the first month. The startups are now back in their home country and are being coached remotely. 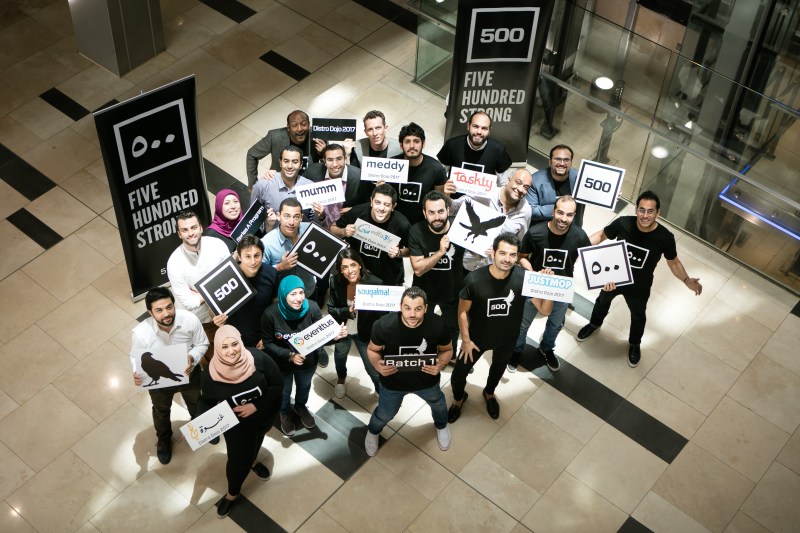 Above: The selected startups of the 500 Startups Series A Program in Doha, Qatar.

“We’ve realized that one of the key differentiating factors between startups in the MENA region compared to Silicon Valley has been the lack of growth hacking knowledge and talent,” 500 Startups partner Hasan Haider told VentureBeat. “In order to bridge this gap, we decided to bring some of that expertise to the region.” Haider, who is based in Bahrain, joined 500 Startups in 2014 and is now spearheading the MENA program.

Each MENA startup receives $200,000 in funding in exchange for equity. 500 Startups declined to share how much equity it receives, explaining that it varies depending on each startup’s valuation.

The $1.8 million came out of the $20.5 million 500 Falcons fund, which was announced in 2015 but officially launched in May to target the MENA region. According to Haider, the accelerator plans on investing in 100 to 150 MENA-based startups in the next three to four years. He adds that the accelerator has made 39 investments out of its global fund in the MENA region so far, in countries like Egypt and Jordan.

500 Startups chose Qatar to launch its first MENA Series A program because of the accelerator’s strategic partnership with the Qatar Science and Technology Park, Haider says. Some of its limited partners (LPs) are also based there, he adds.

The Series A program participants will likely graduate in an uncertain economic climate. Several Middle Eastern countries have recently cut diplomatic and transport ties with Qatar, accusing it of backing terrorist groups. Qatari startups may therefore find it challenging to hire or seek future investment from outside their borders, or to enter the markets of neighboring countries.

But Haider remains hopeful. “You can always find an excuse not to invest in the MENA region,” he said. “In Egypt, for example, the startup ecosystem has developed significantly despite the political turmoil.”