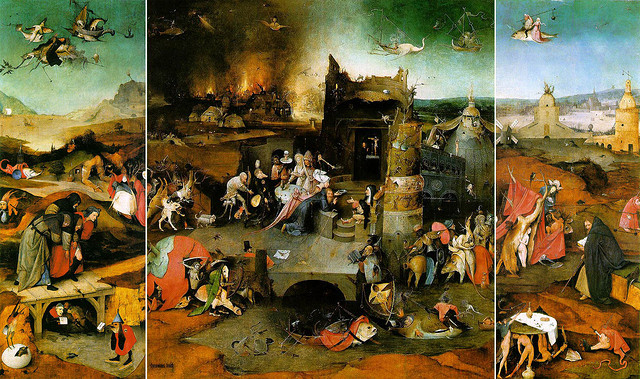 I spotted an SEC filing for Art.com today, which prompted a rather digressive discussion about art with my fellow VentureBeat writer Meghan Kelly and editor Dylan Tweney. It seems that in addition to being technology nerds and journalists, we also share an appreciate for visual art. Our artistic tastes differ however, just like our fields of interest within the tech world. Meghan is drawn to Spanish court painting from the 16th century, Dylan’s favorite painter is Bruegel, and me? I am drawn to anything large, abstract, and filled with color. We all agree however, that Bosch paintings freak us out. And with that continued digression, I give you Funding Daily.

Guavus sweetens up with $30 million in investor vitamin D

Big data company Guavus took $30 million in its fourth round of funding. Guavus combines insights from the data analytics with decision-making applications to help businesses make wise choices. This round will be used to expand its core suite of products and scale operations to meet global demand. This round was led by Investor Growth Capital with participation from QuestMark Partners, as wells previous investors Artiman Ventures, Sofinnova Ventures and Intel Capital. It brings Guavus’ total capital raised to $78 million. Read the press release.

Mirantis, not to be confused with the Praying Mantis (easy mistake to make), closed a $10 million round of growth financing to eat its mate. Not really. Actually, Mirantis is an OpenStack system integrator that will use the investment to bolster its position in the OpenStack market. OpenStack is a cloud-based infrastructure for applications that is gaining traction with service providers, software-as-a-service providers, and enterprises. Mirantis’ role is to smooth the transition to an OpenStack platform for its clients, including organizations like Cisco, Dell, GE, HP, NASA, WebEx, Gap, PayPal, Internap, and AT&T.Dell Ventures, Intel Capital, and WestSummit made up this first round of funding. Mirantis previously functioned on sales revenues. Read the press release.

ConnectSolutions shakes off the bootstraps with $10M in initial funding

ConnectSolutions has raised $10 million in its first round of funding. The company sells private, managed clouds with voice and telephony, web conferencing, messaging, and video streaming capabilities to business customers. Customers include financial organizations, large corporations, technology companies, and 12 government agencies. ConnectSolutions claims to have delivered more than 4 billion minutes of collaboration on its UC3 Managed Cloud product and has been profitable for several years. Frontier Capital led this round. Read more on VentureBeat.

With its data warehouse for hospitals, Health Catalyst pulls in $33M

HealthCatalyst is the latest health technology startup to benefit from the Affordable Care Act, aka Obamacare, which mandates that health providers and hospitals shift to to electronic records. The startup, once known as Healthcare Quality Catalyst, provides healthcare data warehousing for 81 hospitals and health systems, serving 20 million patients.The Salt Lake City, Utah-based company raised a mammoth $33 million in funding from a roster of venture capital firms. The second round was led by Norwest Venture Partners, with participation from existing investors Sequoia Capital and Sorenson Capital. Read more on VentureBeat.

InsideSales laces up $35 million from hills of Silicon Slopes

InsideSales.com closed a deal for $35 million in its second round of funding. InsideSales applies data science and statistics to increase sales for businesses. It products provide cloud-based sales automation and predicative analytics services to get the most out of remote sales efforts and stay on top of leads. Clients include Cisco, Dell, Eloqua, Gannet, and Groupon. This hefty investment will help scale the platform, as well as add new solutions. New investor U.S. Venture Partners and existing investor Hummer Winblad Venture Partners led this round. Read more on VentureBeat.

Parking startup Streetline zooms off with $25M in its engine

Streetline has raised $25 million in financing for its smart-parking service. Streetline works with cities, garages, airports, universities, and other private parking providers to install ultraslow wireless sensors that create a dynamic system of places to park. This data is connected to the mobile apps, which drivers can use to navigate to an open spot. Streetline is in 30 locations in the U.S. and Europe and will continue to expand. This third round of investment, led by True Ventures, also included new investors Citi and Qualcomm Ventures. Sutter Hill Ventures, RockPort Capital Partners, and Fontinalis Partners made follow-on investments. This brings Streetline’s total capital raised to over $40 million, not including a $25 million credit facility taken from Citi last year. Read more on VentureBeat.

ScaleArc nabs $12.3M to provide visibility into your SQL database

ScaleArc has pulled in $12.3 million for its second funding round to bolster its efforts to make SQL databases easier to manage. The Silicon Valley-based company simplifies the way you deploy database environments. It claims its ScaleArc iDB software can lower costs by up to 50 percent for its customers, which include online gaming company Kixeye and Weather Decision Technologies. To further the development of its database infrastructure software, ScaleArc raised funding from Accel Partners with participation from Trinity Ventures and Nexus Ventures. This brings the company’s total investment to $18.3 million. Read more on VentureBeat.

Downtime was rare in my childhood home. My parents encouraged us to be active and outlawed television. Axcient’s cloud solution provides a similar service to small and medium sized businesses. Its technology eliminates system downtime and data loss to keep applications up-and-running. According to an SEC filing, Axcient has raised two separate rounds of funding: a $7 million round and a $10.65 million round. Allegis Capital, Thomvest Venture, Scale Venture Partners, Peninsula Ventures, and Novus Ventures are included on the filings. This brings Axcient’s total capital raised to over $51 million.

Art.com, an internet retailer of fine art, prints, posters, and decorations, tooks $6.25 million to buy Zenfolio, an online community and marketplace for photographers. With this acquisition, Art.com and Zenfolio will continue to operate independently. Art.com will be able to expand its inventory and Zenfolio will be able to reach Art.com’s 12 million global customers. Investors on this filing include partners from Polaris, as well as Benchmark and Stripes group. The company has not yet responded to request for comment. Read the press release.

Gathering evidence for a lawsuit is time consuming. I would know. My parents are lawyers. EasyESI provides a cloud-based platform that applies “big data” to legal discovery to help lawyers find the case evidence they need. There is a growing amount of electronic evidence and lawyers don’t generally have the training or time to mine through it. EasyESI has raised over $1.5 million to date, led by Manu Kumar of K9 Ventures. The company is based on Berkeley, CA. Read the recent filing.