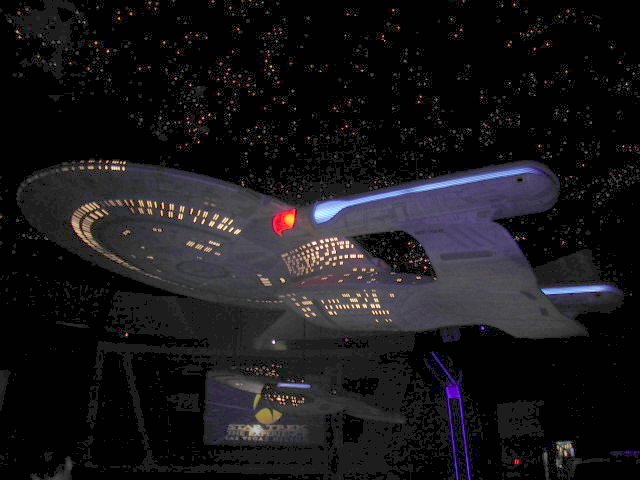 What do Star Trek and startups have in common? ‘Enterprise’ and ‘Data’ play a role in both and nerds everywhere get excited about any news surrounding these topics. Here is today’s round up of funding news. Nerds.

As the one writing about the funding news AND going to see Star Trek on day 1, does that make me queen of the nerds? Probably not, but a girl can dream.

SAP is betting big on startups. And big data. The business software behemoth is more than doubling its commitment to the SAP HANA Real Time Fund, going from $155 million to $405 million, to support innovation surrounding real-time applications and big data. The SAP HANA fund launched in 2012 and primarily makes investments in early stage venture capital funds and startups building off SAP’s technology. Read more on VentureBeat.

Airwatch adds $25M into its coffers, because $200M isn’t enough

AirWatch, which helps companies manage employee’s mobile devices, raised another $25 million in a follow-on to its first round of funding today because the $200 million it received in February just wasn’t quite enough.  The round was led by Accel Partners. The Atlanta-based company makes mobile security software that manages devices, apps, email, and other content. It’s customers include Delta and Lowe’s. Read more on VentureBeat.

MicroVentures has a powerful pitch for startups: We’ll help you raise money. The Austin-based company helps accredited investors pool their cash together (usually somewhere between $1,000 and $30,000 per person) to fund early-stage startups like Ribbon and Medigram. For investors, it’s the opportunity to fork over as little as $1,000 but still get in early alongside more seasoned angel investors. MicroVentures has reached $16 million in investments today and claims to have surpassed any other equity-based crowdfunding platform. Read more on VentureBeat.

After raising more than $10 million on Kickstarter, smartwatch maker Pebble announced today that it has received $15 million in first round funding from Charles River Ventures. That’s a pretty heft sum for a company that was initially shot down by VCs, a blow that led to the Kickstarter campaign. After nabbing around 85,000 orders on Kickstarter and successfully kicking off Pebble shipments, it’s not surprising to see investors taking a second look. Pebble says the funding will let it expand its software engineering team, scale for demand, and grow its open development platform. Read more on VentureBeat.

Marqeta raises $14M to bring ‘Starbucks-type loyalty to every merchant’

Loyalty and payments startup Marqeta has raised $14 million and announced that it will power the Facebook Card. Marqeta’s approach to e-commerce encourages consumers to make their purchases online to earn rewards from participating retailers. Marqeta keeps tracks of all that information in one place. Consumers save money and retailers gain loyalty. Existing investors Greylock IL and Granite Ventures participated in this round, along with new investor Commerce Ventures. Read more on VentureBeat.

BonitaSoft, the business process management (BPM) solutions provider, announced today it has raised $13 million it its third round of funding thus far. The company’s open source software allows for easy business process modelling and implementation. It is based in Southern France. The Series C was led by the French National Fund for Digital Society (FSN PME), a French government initiative that invests in technology companies. Returning investors Ventech, Auriga Partners, and Serena Capital were also involved. Read more on VentureBeat.

Social e-commerce site, Luvocracy has raised $11.5 million in funding from Kleiner Perkins, Google Ventures, RPM Ventures, XG Ventures, CrunchFund, Marissa Mayer, Ali Pincus, Jim Lanzone, and Tony Robbins. Luvocracy is a San Francisco-based startup that lets you buy products you “luv” based on recommendations from the people you trust. You can also earn rewards if someone buys a product you recommend. Read more on VentureBeat.

The “big data” and analytics startup EdgeSpring officially launched today with $11 million in financing from Kleiner Perkins Caufield & Byers and Lightspeed Ventures. The company’s business intelligence and analytics platform enables you to quickly obtain business information from any size, structure or data without having to depend on data analysts or information technology professionals. The platform makes it easy for average users to ask questions about data like financial or user information any time and anywhere across data silos. Read more on VentureBeat.

I don’t think you’re ready for this Jelly

Relatively young Bitcoin startup BitPay has announced it has raised $2 million more in funding to lead the market in Bitcoin payment processing. This follows a $510,000 seed round it raised in January. BitPay specializes in e-commerce, B2B, and enterprise solutions for Becton and it claims processing fees as low as 1 percent with no setup fees. It signed up more than 1,900 new merchants in April, and it claims to sign up about 100 new merchants per day at this point. The new funding was led by Founders Fund, the fund behind the so-called “PayPal Mafia.” Also on the round is Max Keiser’s fund Heisenberg Capital, a London-based fund targeting Bitcoin-focused companies. Read more on VentureBeat.

Patients need a better way to communicate with their physicians, and Ringadoc believes it can help. The San Francisco-based startup added another $700,000 to its seed round today, bringing its total funding to $1.9 million.Ringdoc helps doctors separate personal and professional messages, and enables them to triage patients before speaking to them on the phone or in person. Investors include Ryan Howard, CEO of Practice Fusion (Ringadoc is currently incubating in Practice Fusion’s offices), Sharon Knight, cofounder of One Medical, the chain of concierge primary care practices, Siemer VC, Telegraph Hill Group, and Dr. Lyle Dennis, the neurology chief at Bon Secours Health System. Read more on VentureBeat.

TheMadVideo raises $500K for video of Steve Job, among other things

TheMadVideo has raised $500K in seed funding for its platform that brands and content creators can use to make video moments taggable and shareable. The technology indexes moments in a video by people, place, things, topics etc…  so brands can pinpoint moments in videos the feature their products and link them to sale pages. The company was founded in Spain and is now based in San Francisco.