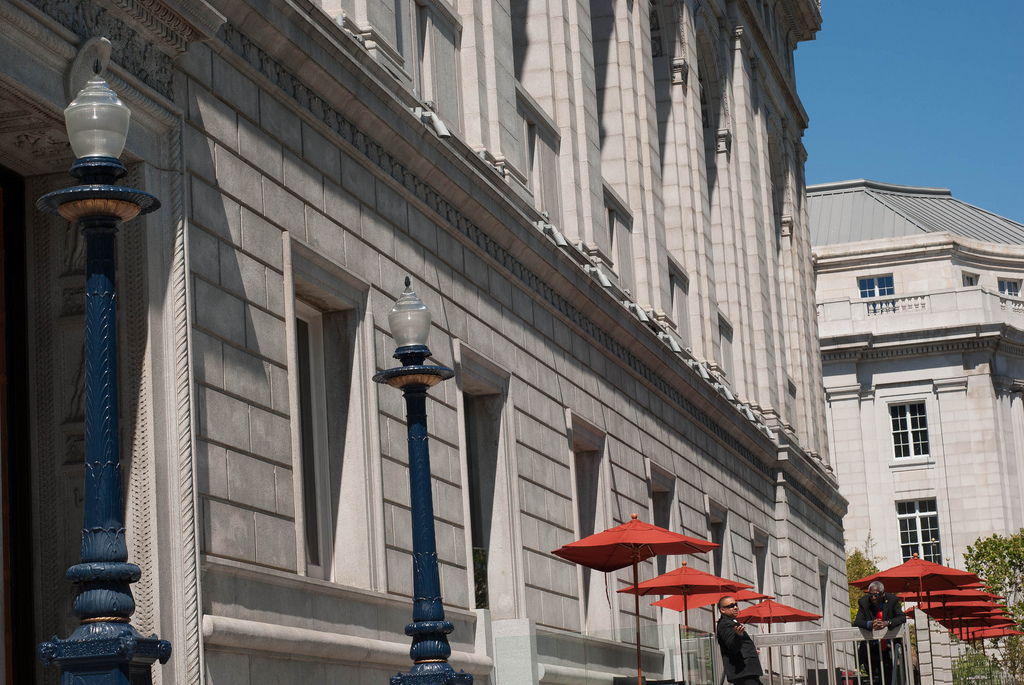 I attended an event at the San Francisco Public Library today and admit that this is my first time entering the building. Once I safely maneuvered through UN Plaza (no mean feat) I found myself transported back to the days of my youth. Back then, my mother would drop me off at our local library while she went grocery shopping and I would emerge with a wagon full of books. Literally. Today the circumstances are slightly different, but the magic of being in a building filled with books remains. If only I still had a library card.

In a letter to investors today, Netflix CEO Reed Hastings asked investors to finance $400 million (PDF), which the company intends to use for refinance existing notes ($225 million) and other “general corporate purposes.” Netflix’s confidence comes a week after the company’s Q4 earnings exceeded expectations and pushed its stock price up significantly. Even after asking for the new investment, Netflix’s stock closed at 169.12 for the day. Read more on VentureBeat. Read more on VentureBeat.

DataGravity, a startup that won’t release a product until 2014, today pulled in an additional $30 million from Silicon Valley venture capital firms. This second round of funding brings its total to $42 million, and it should help it realize its vision to sell “big data” tools to mid-size companies that can’t afford to hire a data scientist or data services team. Andreessen Horowitz led this funding round, with participation from existing investors Charles River Ventures and General Catalyst Partners. Andreessen is betting big on big data and has already made investments in GoodData and Continuuity. Read more on VentureBeat.

Cloud call-center startup NewVoiceMedia has raised $20 million in its second round of funding, money that should help it bring its telephony solutions to more customers in the United States and develop new products. U.K.-based NewVoiceMedia offers its ContactWorld platform to help companies set up cloud contact centers. It serves 8,000 customers in 30 countries, including Parcelforce, PhotoBox, QlikTech, SHL, Berry Bros & Rudd, and Long Tall Sally. Highland Capital Partners and MMC led this new round, with participation from existing investors Eden Ventures and Notion Capital. Including the new funding, NewVoiceMedia has raised $26.3 million. Read more on VentureBeat.

Houzz, a platform for home remodeling and design, has raised $35 million. More than 12 million homeowners, home improvement professionals, and design enthusiasts come together on the site to find inspiration, tips, and resources and collaborate on projects. Along with the funding, Houzz also announced the launch of Houzz Pro+, a local marketing program for remodeling and design professionals. This is Houzz’s third round of investment. New Enterprise Associates and GGV Capital, with participation from Sequoia Capital which led the Series B in December 2011. Comcast Ventures, Kleiner Perkins Caufield & Byers, and Yammer found David Saks also participated. Read more on VentureBeat.

As if $125 million were not enough, Box has expanded its gargantuan funding round to $150 million, according to an SEC filing. A company spokesperson said this will allow existing investors to “make additional investments.” The cloud storage startup had not filed the paperwork for its fifth funding round until today — although the news was announced in late July. The previous round was led by General Atlantic with participation from Bessemer Venture Partners, DFJ Growth, New Enterprise Associates, SAP Ventures, Scale Venture Partners, and new investor Social+Capital Partnership. Read more on VentureBeat.

WatchDox has raised $12 million to keep enterprise documents protected as they are shared on the go. Its ‘document-centric’ solutions ensure critical and sensitive documents are accessible and can be used collaboratively, while also upholding their security. This round of financing will help WatchDox expand its footprint in other sectors and supported the acquisition of InstallFree in December, a developer of technology that makes applications accessible across devices. Millennium Technology Value Partners, which provides “alternate liquidity solutions” participated in this round, along with existing investors Blackstone, Gemini Israel Funds, Shasta Ventures, and cofounder of Check Point and Imperva Shlomo Kramer. Read more on VentureBeat.

Doctors on demand startup Ringadoc raised $1.2 million in seed money, led by Founders Fund. The company connects doctors to patients on the phone and through its website, no appointment needed. Doctors can triage patient calls using their smartphones at times convenient to them which cuts down on unreturned calls, frustrated pateietns, and overworked doctors. The platform launched in beta in August and now reaches more than 500,000 patients in 20 states. This follow-on financing adds to the $750K Ringadoc raised from Founders Fund last June.

SimilarGroup has closed $2.5 million in new financing for branded browser plugins, as reported by TechCrunch. These plugins help people and businesses discover relevant content on the web by providing suggestions of interesting websites, based on what sites they are already surfing. The company’s combined suite of plugins have been downloaded tens of millions of times. Moshe Lichtman, the former President of Microsoft’s Israel R&D Center, led this round which brings its total of $3.5 million. SimilarGroup is based in Tel Aviv.

Tablet ed-tech company Pluto Media raised $500K to expand its award-winning app, Pluto Learns Piano. This children’s game gets kids excited about learning music. They play on the multi-touch computer screen and are rewarded for their performance with stars that lets them unlock new songs. Accel Partners led this additional seed funding, along with strategic investors Learn Capital and others.