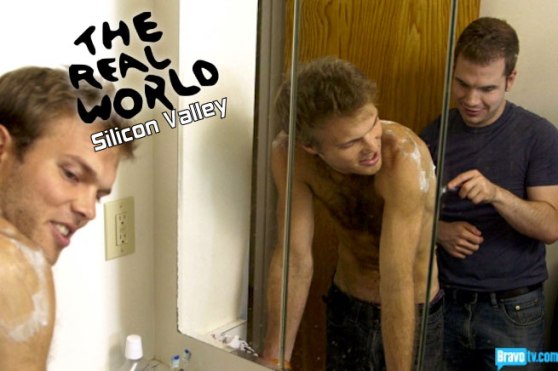 So what, right? So-called reality television hasn’t had any connection with reality since MTV’s “The Real World” first crammed a handful of screen-tested strangers into a house and shoved video cameras in their faces 24-7. No one is expecting the makers of “Real Housewives of New Jersey” to deliver anything even closely resembling its nominal subject.

And the fact that the trailer for the new show already has a rating of just 2 stars — on Bravo’s own website — shows just how execrable this show probably is.

But one thing pisses me off, and no, it’s not Bravo’s loose relationship to the truth. It’s the way the word “geek” is getting steadily drained of all meaning.

Bravo’s trailer proclaims “Geeks are Definitely the New Rock Stars.” Ok, then. So where are the geeks in the trailer?

Apart from one middle-aged guy with a Vandyke beard who appears onscreen for about one second, and who might be central casting’s conception of a geek but is more likely some kind of generic boss figure, there is not one single geek in the whole video.

Instead, we’re treated to a parade of frat boys who like to “work hard and party hard,” airbrushed beauties who weep as they claim “I’m pushing myself so hard,” and testosterone-laden knuckleheads who say things like “Silicon Valley is just balls to the wall.”

These people aren’t geeks. They may be smart, they may be entrepreneurs, and they may even be coders (though I’ll believe that when I see the first line of code any one of them writes). But they are not geeks.

(And let’s not forget the way this trailer seems to airbrush all diversity out of Silicon Valley. In a place where 52 percent of startups are founded by immigrants from India, China, Japan, and many other places around the world, it’s just insulting to pretend that a startup is a bunch of Californians, with maybe the occasional English accent thrown in.)

I grew up in the 1980s, at a time when “geek” was still a put-down that carried real weight. Then a funny thing happened: People like Bill Gates (uber-geek) and Steve Wozniak (as geeky as they come) became fantastically successful. Nerds like Marc Andreessen (a geek in his youth, though now polished to a fine, MBA-like sheen of smoothness) and Jerry Yang (still a geek — just witness his awkward attempt to right Yahoo a few years ago) defined a new generation of geeks who could aspire to become titans of industry, and some of them even succeeded. By the time a couple of geeky Stanford graduate students named Larry Page and Sergey Brin came along, it seemed almost inevitable that geeks would rule the earth, or at least that majority of it controlled by the top 1 percent.

Naturally, now, everyone wants to be a geek.

So, fine. If you’re socially awkward, fascinated with Dungeons & Dragons, and have reached a high level in World of Warcraft, welcome to the club. If you want to join VentureBeat’s game of Magic: The Gathering or celebrate your latest Github commit over a round of Settlers of Catan, fine: You’re probably a geek.

This attempt to redefine the meaning of the word geek disrespects anyone who really did get hassled for being a geek, and it misrepresents and negates the work of a culture that has contributed much to Silicon Valley and the tech world at large. And it’s not just Bravo that’s doing it: All over Silicon Valley, the bros are trying to take over with their own brand of macho startup life.

Go ahead and define your own category of cleavage-showing, perfect tousled-haircut-having, made-up, back-shaved, Pam-sprayed, toned-body entrepreneurship. But don’t tell me you’re a geek, because you’re not.