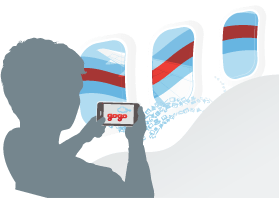 Airplane Wi-Fi service provider Gogo has filled an initial public offering today that will raise an estimated $100 million for the company, according to SEC documents.

Gogo offers an in-flight Wi-Fi service on nine major airlines in North America, including Delta, Virgin America, US Airways and American Airlines. Its service is available on more than 1,100 aircraft (or 85 percent of all Wi-Fi-enabled commercial planes on the continent), with commitments to add service on another 525 in the future. It operates on over 4,000 flights per day.

Gogo will likely use the new capital to grow its in-flight Wi-Fi service by adding it to more domestic and international flights. The company also launched a streaming video service in August, which is available on American Airlines flights.

Founded in 2005, the Itasca, Ill.-based company has raised $500 million in funding to date. It has over 350 employees and faces competition from Boingo and others.