Google has acquired what’s left of Cuil, a once-promising search startup that closed up shop about a year and a half ago.

The startup, which was founded by two former Googlers and an IBM employee, has relinquished control of its pending patents to Google.

As blogger Bill Slawski uncovered today in the U.S. Patent and Trademark Office database, Google has acquired seven of the patents of its onetime rival.

Most of the IP revolves around user interfaces and how to better present search results when multiple meanings are possible for a single keyword or phrase. The patents do not contain any intellectual property about search algorithms; rather, these innovations are about UI only, not what’s under the hood.

Google has been playing around quite a bit over the past few years with its KISS approach to search UI. After adding images, shopping results, and news results in with indexed web pages, the company recently unveiled the addition of people-powered social data via Google+.

Former Googler and Cuil founder Anna Patterson now works at Google again; she’s been a director at the search giant since Cuil shut its website down in September 2010.

Cuil raised a total of $33 million from prominent venture capital firms between its founding in 2008 and its shutdown. The startup claimed to have indexed 120 billion web pages, larger than Google’s index at the time.

Here’s a look at the Cuil navigation and tabs UI for which Google has acquired patents: 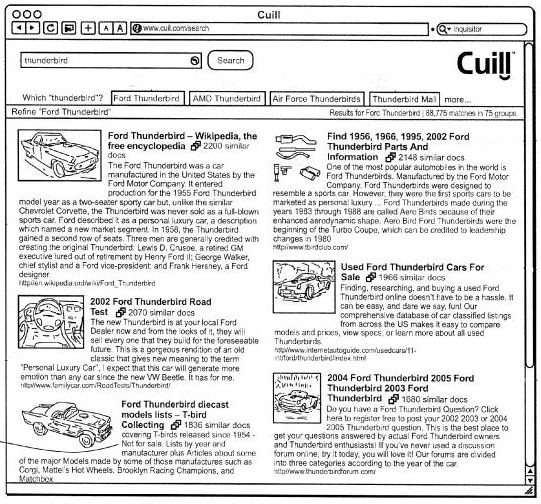 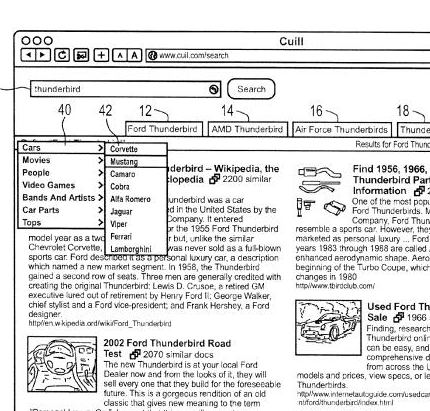