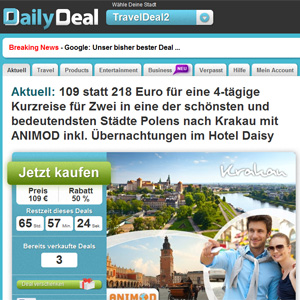 Google has acquired German Groupon-like deals site DailyDeal, according to a homepage message from DailyDeal. Google has not confirmed the acquisition nor have terms of the deal been disclosed.

Google has been off to a somewhat slow start with its still-young Offers service, which it created after Groupon declined a $6 billion acquisition offer from Google back in late 2010. Google Offers is now live in nine U.S. cities and will be launching in more in the near future. This will mark Google’s second acquisition to help its deals presence; the first was the buyout of DealMap last month, which enabled Google to shows deals on Google Maps.

DailyDeal offers deals in Germany, Austria and Switzerland, so it will give Google a quick way to add customers in those countries. It launched in December 2009 as a two-person startup and has quickly grown, with a reported 252,000 coupons sold in the first quarter of this year. The Austrian version of the site has already reportedly surpassed Groupon in the country.

Google Offers and the newly acquired companies will likely get more attention with the introduction of Google Wallet, a service that is quietly launching today and should become more prominent in the coming months. Wallet is Google’s long-awaited mobile payments service that will let users pay for goods using their Android phones.