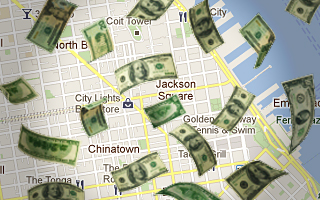 In a strategic no-brainer, Google has acquired The Dealmap, a startup that shows on a Google Maps-powered map just where you can find all the Groupon-like daily deals in your geographic area.

A Google spokesperson said that while neither company is disclosing the terms of the deal, Google is “impressed with what the Dealmap team has accomplished and excited to welcome them to Google.”

Over the past year, Google has been focusing a lot on the intersections between location and commerce. Late in 2010, the company toyed around with the Yelp-like Hotpot. Around the same time, it also reportedly made a pass at Groupon in the form of a $5.3 billion acquisition offer.

Then, in January 2011, we got a peak at Google Offers, the company’s Groupon competitor. One month later, Google (finally) added checkin capabilities to Latitude; checkin deals from merchants weren’t far behind.

Still, the search giant has been moving slowly, relatively speaking, in getting a powerful and popular deals feature to market. And in a field so rife with heavyweight competitors, what could possibly make more sense than snapping up a company that integrates Google’s excellent map data with information from existing daily deals companies?

At this point, the object of the game isn’t to beat daily deal players like Groupon and LivingSocial per se; it’s to become the simplest one-stop-shop for deal-seekers, then to integrate Google’s own revenue-generating offers (and advertising) with the deals from more established players. And the Dealmap is a perfect, consumer-friendly way to do that.

Here’s what The Dealmap looks like right now for San Francisco; it’s easy to imagine what Google might be able to do with it in the near future: 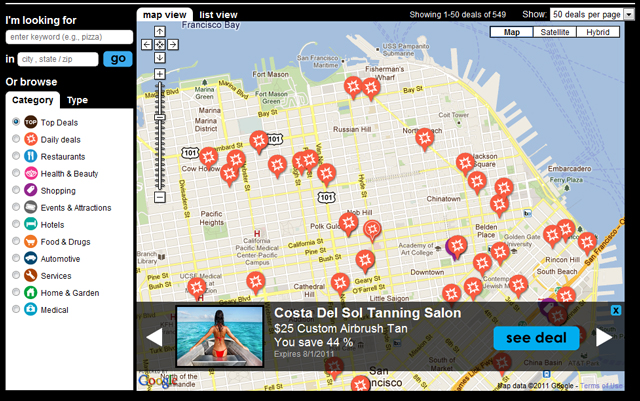 As a Google rep told VentureBeat, “We’ve been thrilled with the early success of our commerce offerings, and we think [The Dealmap] can help us build even better products and services for consumers and merchants.”

For now, the Dealmap brand and product will live on, though based on some language in the Dealmap blog, it seems an eventual transition and integration into other Google products is in the works. We’re looking forward to what Google will do with this very interesting and potentially lucrative technology.