Google Ventures, Kleiner Perkins Caufield & Byers, and Andreessen Horowitz are creating a new program to fund startups that want to make apps for Google Glass. It’s called Glass Collective, and it’s a huge opportunity for developers willing to work on a barely-alpha piece of hardware.

When entrepreneurs with a Glass-y idea get a chance to pitch any one of the firms, they’ll actually end up pitching to all three of them. And if one firm decides to invest, it’s highly likely that all three VC funds will get in on the deal.

It’s not a new fund, but it is a distinct drive for three of Silicon Valley’s biggest names and deepest pockets to accelerate the Google Glass ecosystem, all while giving those startups the best possible access to Glass itself.

In a phone call today with Google Ventures partner Bill Maris and Kleiner Perkins general partner John Doerr, VentureBeat learned about the specifics of the partnership and the kinds of apps these VCs are trying to find.

“It’s the best team to go to build a great Glass business,” said Doerr, emphasizing that the startups funded through this partnership will have unparalleled access to the Google X team that actually designs and makes Google Glass. And that team, said Maris, is “extremely supportive” of the new program to fund Glass apps. 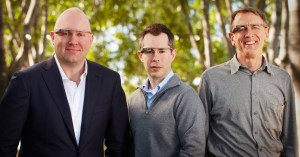 As for the kinds of applications the VCs want to find and fund, both partners had a few concrete ideas, both for lightweight consumer fare and meatier enterprise applications.

“Photos are, for me, kind of the killer app,” said Maris. “You get point-of-view, very candid photos that are very different than you’d take with a regular camera.”

On the more serious side of the ecosystem, Maris said, “If you’re a paraplegic, it’s not as easy as it should be to send a text or an email. And Google Glass can make that really easy. I think that could be really important. … And I used to work at a neurobiology lab, and scientists are excited about being able to interact with their experiments without having to remove layers of gloves.”

Doerr also said he’s particularly interested in Glass applications in medicine. “All kinds of tasks in enterprise and business are done so much better hands-free, but the ones that are most attractive to me are in health care,” he said. “It’s so screwed up. But you can imagine all the knowledge workers in a hospital having Glass and making better decisions.”

Also, Doerr said, he’ll be keeping an eye out for Glass apps for the classroom. “I’m quite curious about what will happen with education. I can’t wait to take a pair to [Khan Academy founder] Sal Khan and see what he can do.”

Ultimately, however, both Doerr and Maris admitted that as VCs, they’re at the shallow end of the creativity pool; they’ll be waiting to see what entrepreneurs can dream up and won’t be holding too many expectations in the meantime.

“This platform is so new, so early, and so unlike anything we’ve seen before that it’s impossible to make any predictions,” said Doerr.

RELATED: How to build apps for Google Glass [VIDEO]

Both VCs said they have no problem with funding competing applications, even apps that compete with Google Glass’s built-in apps. Since Glass isn’t available to consumers yet, they said they’re not expecting companies to come in with revenue and users — or even highly evolved plans for revenue.

“When the transistor radio was invented, people wondered who in the world would want one of those,” said Maris. “Most of these things — Google, YouTube — don’t start out looking for a commercial market. If it makes people’s lives better, there will be a commercial market, but it often doesn’t start that way. At Google Ventures, we don’t talk about the mcompercial application, we talk about the team. … Going from seed to large companies is an unpredictable path, and if you tie yourself to a commercial outcome early on, it’s often the wrong thing.”

Doerr concurred, adding, “If we come across the Khan Academy of Google Glass and they’re really resolved to be nonprofit, that’s not our business, but we’ll find them someone who can fund them.”

Ultimately, said Maris, the partnership between the three firms seeks to capitalize on what could end up being Google’s next big ecosystem after Chrome and Android, creating and exploiting (in a good way) opportunities that arise from the technology now still under development.

“After working with the Glass team and seeing how quickly that team came together, projecting out what it’s going to be, it became obvious to me there’s an opportunity to create a platform,” he said. “Google has what it takes to invest in this.”

Doerr said he first had the chance to use Glass almost two years ago. “In comparison to a smartphone, which puts the web in your pocket, this puts the web right before your eyes. And the interface isn’t touch, it’s voice. … It’s like magic, and we can’t wait to see what brilliant things entrepreneurs do with this.”