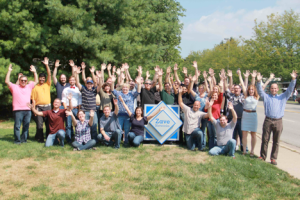 Zave Networks, a company that digitizes coupons and loyalty rewards, just announced it is now a part of the growing Google family.

A spokesperson from Google told VentureBeat in an email, “We’re thrilled to welcome the Zave Networks team to Google. They have developed an impressive platform to connect consumers with coupons, special offers and reward programs for their favorite businesses, and we look forward to their joining our commerce team.”

Lately, Google has been digging its heels into the coupon and deals space. In 2010, the company offered daily deals giant Groupon $6 billion to absorb the company. When Groupon declined, Google started its own deals feature, Google Offers. In fact, as recently as yesterday, Google was showcasing the deals on its homepage.

The company’s investment arm, Google Ventures has also invested in the digital coupon space, injecting an unknown portion of $10 million into WhaleShark Media. The deal was finalized in early August.

Zave was founded in 2006 in Kansas City.