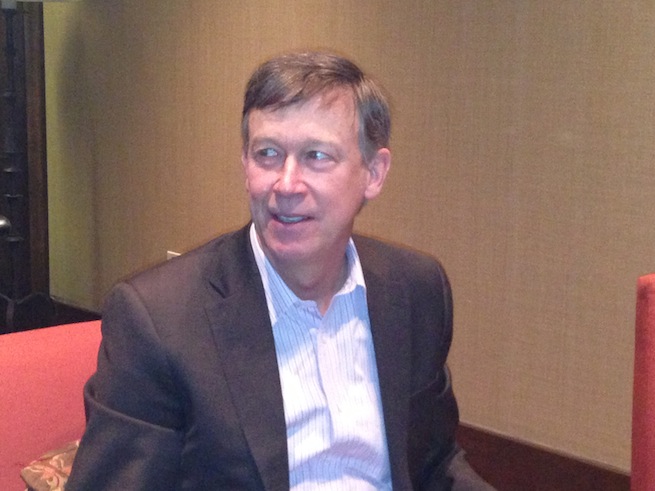 BEAVER CREEK, Colo. — For technology entrepreneurs, Silicon Valley is no longer the only option. Denver, Seattle, and Austin are hubs of entrepreneurial activity, and these and other cities offer founders a lower cost of living and tax benefits, and access to local venture capital.

Colorado is home to companies like Dish Network, MapQuest, and Arrow Electronics as well as an increasing number of startups. The state is clearly angling to be the destination of choice for rising companies, not a pitstop on the road to Silicon Valley.

At the VCIR conference to showcase the mountain region’s startups, Gov. John Hickenlooper (D) spoke candidly about the state government’s commitment to tech. In a private meeting with the press, he stressed his mission to turn Colorado into the most pro-business state without jeopardizing its natural beauty.

VentureBeat: Is there any legislation on the table that would support tech entrepreneurs?

John Hickenlooper: We have accelerator legislation under consideration that will give grants for “proof of concept,” meaning an idea that is considered business viable. We want to support “shoot-ups,” a local term for rapid growth companies. I look to [Foundry Group managing director] Brad Feld and the work he has been doing on creating a community and how government can support it. I was an entrepreneur myself and often say that I’m on loan to public service.

VentureBeat: How can you compete with a technology hub like Silicon Valley?

Hickenlooper: I think every community is competing. We have the Colorado Rockies, a great wonder of the world. We have one of the two or three most progressive public education systems. We have charter schools all over the place. Young people care about lifestyle. We have more music venues in Denver than Nashville or Austin [do].

VentureBeat: But how can you keep entrepreneurs in Colorado?

Hickenlooper: Mergers and acquisitions [are a problem]. We don’t have aggregators … Oracle and Google and those guys. Generally, what’s interesting is that they don’t necessarily move them [the startups they acquire].  But they do want beachheads in other places. They look at the cost — in California, the tax burden is too great. Our biggest competitors are Portland, Seattle, and Austin. It’s not Silicon Valley.

VentureBeat: One of the biggest problems we face in Silicon Valley is a talent shortage. What are you doing to inspire more kids to pick up computer science skills?

Hickenlooper: We attract for whatever reason a lot of the kids that were nerdy and on the sidelines. The kids that weren’t on the football team. A lot of them became technical nerds and learned how to write software. We have always attracted a lot of free spirits and independent thinkers, although I don’t think it’s a dramatically different percentage than a place like Seattle or Austin. We’re all trying to figure out how to do it.

VentureBeat: Culture is a big draw, certainly. But how about access to venture capital?

Hickenlooper: When I got elected, we looked our our economic development program. People wanted less red tape and better training, and better access to venture capital came up all over the state.

So we have a group of CEOs we are working with. The idea is to be a partner to business. We’re launching a $100 million or $150 million fund, and Colorado is a limited partner. We already have a draft of what the legal organization will look like, and the goal is to launch by the summer.

VentureBeat: Interesting. Has this model been tried elsewhere? What types of companies will you invest in?

Hickenlooper: A number of states have done variations of it, but nothing exactly like it. Government doesn’t have a high tolerance for failure. We’ll be doing some seed funding, but it could also be mezzanine rounds.

VentureBeat: Is the city planning to go cloud and consolidate its data centers?

Hickenlooper: We have been consolidating the city’s data center, yes. This is a big part of our CIO’s focus. We are also working on moving our entire state government to the cloud. We are taking all the different e-mail systems and doing everything through Google and in the cloud.

With that, handlers ferreted away the governor to address a roomful of the city’s startups that will be demoing today. VentureBeat will be reporting on the best of the bunch.