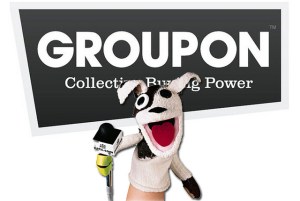 Groupon shares will be priced at $20 when the company begins trading publicly tomorrow on the NASDAQ exchange under the symbol GRPN, according to AllThingsD, which would value the company at $13 billion.

The daily deals company’s share price came out today amid much speculation, and Kara Swisher reports the offering was 10 times oversubscribed, so the company is offering an additional 5 million shares, for a total of 35 million shares.

However, Groupon’s core business of selling local deals is slumping, as we reported earlier this week. The trend of slower local sales has been obscured by product expansions, such as sales of event tickets and vacations.

“If you look at the company’s prospectus, they say they expect to see losses for the foreseeable future,” said Dun & Bradstreet tech specialist Lee Simmons in a call with VentureBeat reporter Jolie O’Dell last week.

Groupon desperately needs to raise cash, and the float was expected to raise as much as $540 million. With the addition of 5 million shares, priced at $20, tomorrow’s offering will likely bring in close to $700 million.

People have been watching news of Groupon’s IPO announcement very closely for echoes of last decade’s dot-com bubble, when companies with little or no revenue were listing themselves as public companies, and then quickly going bankrupt.