Angels are investing more for the same valuation, and apparently they don’t like to travel.

Those are two of the conclusions of the latest Halo Report, a quarterly report on the state of angel investing in the U.S.

Interestingly, however, the average valuation from last quarter remained unchanged at $2.5 million.

A massive proportion of angel deals are syndicated — 75 percent overall — as angels spread the investing risk. And almost all angels like to do deals in their own backyard: 81 percent of all angel deals were completed in the angels’ home state.

“The market for angel investing is solid: Pre-money valuations are stable, round sizes are trending up, and market activity is spread widely throughout the U.S.,” Rob Wiltbank of the Angel Resource Institute said in a statement. “The key trends over the last few years have been syndication and broader geographic distribution of investment; both of which suggest that attractive new ventures are finding places to start all over the country.”

The good news for the tech sector is that about 60 percent of all deals and 55 percent of all investment dollars were in web, mobile, telecom, and software investments. Healthcare took the lion’s share of the remainder, with 19 percent of deals and 23 percent of dollars, while consumer products, industrial, and energy startups were all in single digits in both deal and dollar percentages. Each of the Internet, health, mobile, and software sectors saw deal volume increase. 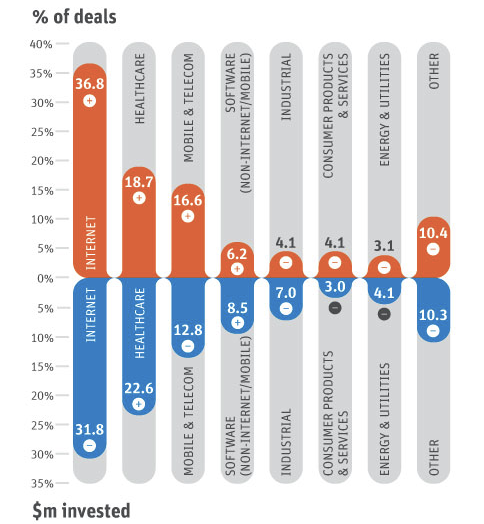 Interestingly, the Southwest region edged out California for the first time in terms of total dollars invested, with 18.1 percent of all angel capital invested. California had 17.4 percent, while New England, Great Lakes, and Great Plains were the only other regions in double digits.

“Seventy-three percent of angel group deals are now done outside California and New England, although 30% of dollars are invested in these regions,” the Angel Resource Institute said. 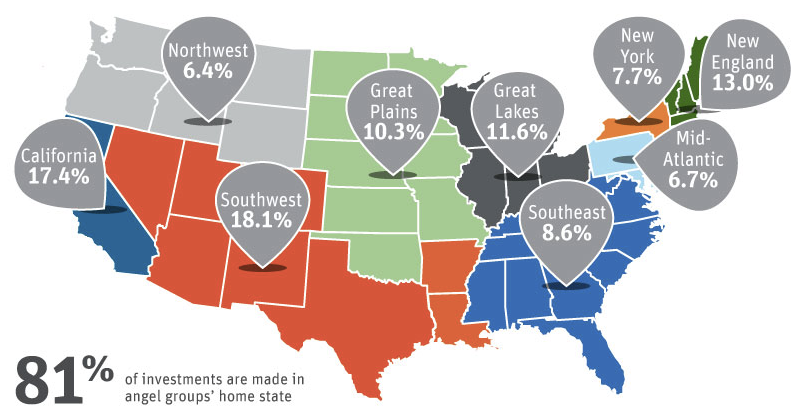 There’s also some surprising news with regard to which angel groups are investing the most. Golden Angels Investors in Milwaukee, WI, invested the most money per deal, followed closely by Golden Seeds in New York and New England.

Leaders for the total number of deals were Alliance of Angels out of Seattle, DesertAngels in Tucson, AZ, and Golden Seeds again.