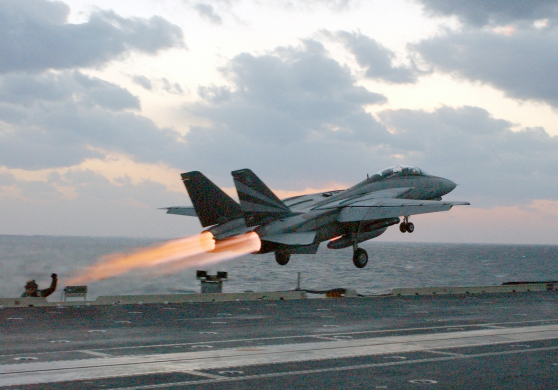 Chris Taylor is an executive with TIBCO Software and a former U.S. Navy pilot.

We live in a time of disruption. The average lifespan of a corporation is dropping fast, and technology and culture are changing at a remarkable rate. We can see disruption as a negative force, or we can see it the way a classically trained fighter pilot sees it — as an advantage.

Fighter pilots have a mythical place in our minds. But the romance of barrel rolls and “coming up on his 6” belie the difficulty and danger involved in controlling the high-performance cockpit. The training is arduous and most candidates never make it off the ground.

Those who reach their aircraft learn a few things the rest of us may not know. First, since the 1950s, American fighter pilots have been trained to understand and follow the OODA Loop: Observe, Orient, Decide, and Act. This process is the disruptor’s handbook.

Second, every sortie is studied in retrospect, as a critical part of rapid cycles of improvement — part of a culture of nameless, rank-less debriefing. 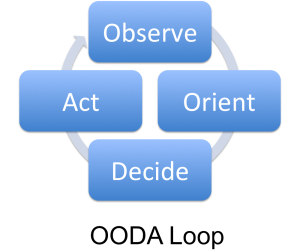 Air Force pilot John Boyd first introduced OODA. At the time of the Korean War, American pilots were flying an aircraft that was less maneuverable than their opponent. Boyd observed that despite the Russian-made MIG-15’s advantages, the American F-86 won a majority of dogfights simply because the Americans had a better field of vision and hydraulic controls that were faster and easier to use.

Of the four steps in the OODA Loop, American pilots had clear advantages in observing and acting, the first and last stages of the Loop. They were in a position to disrupt their adversary’s process by having better information and faster execution.

This same advantage applies no differently in today’s business landscape, a ‘dogfight’ of its own. Of course, business teams stand in place of the solo pilots in this metaphor, but the behaviors and benefits are the same.

Terry Deitz lived the OODA Loop as a U.S. Navy F-14 pilot. He now coaches executives and their teams on how to make their workplace more effective and competitive as part of Afterburner.

Deitz says, “In warfare and in business, the speed at which the OODA Loop is executed becomes the largest factor in disrupting the enemy in the battle space, and the competition in the business space.”

Gartner VP and Distinguished Analyst Roy Schulte offers that disrupting your opponent often comes from using a systems approach that shortens your own OODA loop so that you can ‘turn inside’ the adversary’s process. Schulte talked about OODA Loops at TUCON 2012, a gathering of TIBCO customers and partners last September in Las Vegas.

Schulte showed how each of Boyd’s four activities maps directly to an engineering or management discipline and an associated category of technology:

1. Observation maps to the discipline of gathering data on what’s happening in a company and its environment. As raw data increases exponentially, this is now a double-edged sword and requires the use of ‘big filters’ before meaningless data (“noise”) enters the workplace and muddies the view. Managers need to monitor a wide variety of data sources and understand how to apply the right filters to each. This runs the gamut from B2B data to physical sensors and social media.

2. Orientation maps to the discipline of event management and the associated tools that process streams of incoming real-time event data. Organizations need to actively monitor the environment by calculating key performance indicators, making predictions, preparing real-time business dashboards displays, and issuing alerts to enhance the situation awareness of decision makers. This takes a combination of software tools and human judgment to put incoming information into context with past experiences and their understanding of how the business works to quickly and better predict what to expect next.

3. Decision-making maps to the discipline of decision management. Rule engines, optimization tools, and other kinds of prescriptive analytics (when applied in real time) are used to make better, faster, and more-repeatable decisions at less cost when the environment indicates. Many decisions can be ‘pre-loaded’ and anticipated.

4. Action maps to the business process management (BPM) discipline. It may lead to the use of BPM technology, such as workflow or process orchestration engines, at run time to control the flow of work and trigger the execution of human or automated activities at the right time.

Leading-edge businesses benefit from executive management strength and increasingly powerful analytics software in each of these areas. The pressures of mobile, social, and big data make the situation urgent for the rest.

The power of the debrief

Deitz goes on to explain that there is a key additional contributor to of success that is key to Afterburner’s version of the OODA Loop. It is called the “Flawless Execution cycle” and involves four steps: plan, brief, execute, and debrief.

Deitz says, “As disruptive as the OODA Loop is, what the modern day executive can do to boost his [or her] performance greatly is to add a nameless, rank-less debrief. It can be the most effective and disruptive tool they have.”

Today’s fighter pilots rely heavily on the ability to review every mission as peers, without assigning blame, as a way to very quickly improve performance and minimize avoidable mistakes. In today’s corporate world, cloud, Software as a Service and other techniques give us a lower cost of experimentation than ever. That also gives us the ability to ‘fail fast’ and pivot when necessary. But trying and failing requires an honesty that many organizations struggle to find. Making cycles of attempt and failure happen quickly is also a new way of thinking that benefits greatly from the fighter pilot’s relentless debriefing culture.

Deitz emphasizes his point with this additional comment: “90 percent of the businesses out there have neither the processes in place nor the proper culture to debrief. Do you want to accelerate your version of the OODA loop to supersonic performance? Create the culture and processes to put that knowledge capture back into your next mission at Mach speed.”

Disruption isn’t just a phase we’re going through. Disruption replaces the industrial concepts of the 1800s and 1900s with faster cycles of change coming with lower levels of investment and risk. The nimble business — behaving as an innovation lab, operating in tight iterations, and striving to be faster than the adversary — replaces the traditional factory.

The executive’s role is crucial because he or she creates and sustains a culture that allows nameless, rank-less debrief. That has to come from the top. But the people executing the OODA loops in business — the pilots — are mostly managers, supervisors, and individual contributors in operations departments.

The OODA loop depends on four kinds of mental (and sometimes software) models:

Those who see disruption as their advantage and understand the twin values of the OODA Loop and debriefing will occupy the mythical place held by people like Steve Jobs and Bill Gates.

Chris Taylor flew for the US Navy before finding a home in hands-on technology 17 years ago, first with Perot Systems, Accenture, and ILOG (now IBM) before becoming a marketing executive with TIBCO Software.  He lives in Southern California, often speaks on technology at tech conferences and events, and manages SuccessfulWorkplace.com, “A place for new ideas in a fast-changing world.” He can be found at @FindChrisTaylor.