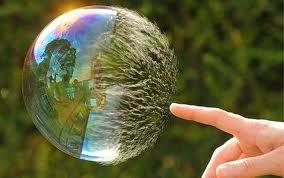 No, not that kind of bubble.  The bubble we’re living in is actually much more dangerous than the classic tech bubbles that inevitably come and go, because this particular bubble may well prevent American entrepreneurs from playing a leading role in shaping the future.

A classic tech bubble inflates expectations of what’s possible — and ultimately dashes the hopes of many investors and entrepreneurs. But it also leaves new technologies and a handful of great companies in its wake.  Hence the t-shirt that one of my investors pointed me to: “Please God Just One More Bubble.”  We are probably in one of these bubbles now.  But this isn’t the bubble I’m worried about.

Today, most American entrepreneurs continue to be focused on building businesses that are fundamentally about serving the American middle class (daily deal entrepreneurs, you know who you are).

That’s fine, except for one thing: the defining economic event of the 21st century is likely to be the rise of the global middle class.

Who’s going to shape this next century (or, as President Obama might put it, “win the future”)?  Sadly, at this point, I wouldn’t bet on American entrepreneurs, most of whom are living in a 20th Century Bubble.  No, I’d bet on entrepreneurs in emerging markets, the folks who deeply understand the growing global middle class — because they’re a part of it.

If you need proof, check out a New York start-up called Peek that is is kicking some serious smart-phone butt in emerging markets.  Or check out a recent winner of the MIT $100K competition, Sanergy, that is enabling a network of franchisees to provide consumers in emerging markets with sanitation systems (read: toilets) that convert waste into energy.

Sadly, for every Peek or Sanergy, there are hundreds of start-ups that are the result of 20th Century Bubble thinking.  And that’s a shame.  Because the future will likely belong to those who aren’t in the bubble.

Josh Green (@joshuabgreen) is the co-founder and CEO of Panjiva (@panjiva), an intelligence platform for global trade professionals that got its start by helping companies serve the American middle class.