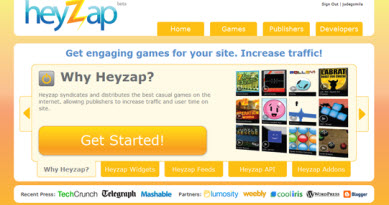 Showing there is still investor interest in games, startup Heyzap is announcing today it has raised a round of in seed funding from Union Square Ventures. The amount was $500,000 to $1 million.

Heyzap creates widgets that allow any web site operators to embed casual games on their sites. The San Francisco company launched the widgets in January and the widgets are now embedded on more than 20,000 sites. There are more than 12,000 free Flash games that can be embedded into the widgets. Back in February, the company had only 3,000 web site partners and 6,000 games. 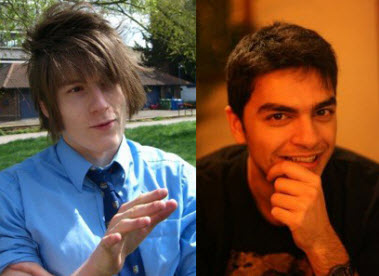 The funding is a follow-on to a small amount of Y Combinator funding the San Francisco company raised in September. The company has only two employees — founders Immad Akhund and Jude Gomila — and it plans to hire two more with the new funding. How’s that for capital efficient?

Heyzap has released an applications programming interface to let publishers create their own game portals and pull out specific games. Cooliris and Weebly are a couple of the partners. The publishers can use the API to access 12,000 Flash-based casual games. Partners such as Cooliris can pick games that are contextually relevant to the web site and get those to appear in the game widget.

It’s a good deal for developers, too, because it’s a way to distribute games to a far wider audience than they otherwise might reach. They can upload their games directly into the site. The games generate revenue via pre-game video ads. Heyzap takes a cut, the game developers or publishers get a cut, and so does Mochi Media, which embeds the ads into the games.

The company faces some serious competition on the web from the likes of Wild Tangent, Oberon Media, Addicting Games, Games2Win, GameCurry, and Kongregate. Akhund previous founded Clickpass and sold that a few months ago to Synthasite. Gomila said the company started looking for funding in March and had multiple offers from a variety of investors. Other angel investors who participated in the round include Naval Ravikant of VentureHacks.com, del.icio.us founder Joshua Schachter, and another unnamed investor.