Launch is your typical startup conference: Entrepreneurs pitch their startups to a group of judges, primarily investors and tech press.

But this year, something special happened.

Midway through the conference, which took place earlier this week, San Francisco web designer Rose Broome came on stage to introduce HandUp. Launch founder Jason Calacanis set the tone for her presentation by mentioning that he had already invested in HandUp, which is a bit out of the ordinary, as he usually waits until the startups have launched. “I think you’ll understand why,” he said.

Within minutes, members of the audience were in tears.

HandUp is a relatively new service that lets you donate directly to homeless individuals in your neighborhood. VentureBeat first covered the startup back in August. 100 percent of the donations go to the essentials, like food, clothing, and medical care. What stands out about HandUp is the human touch: Individuals can share their stories and ask for specific items, like dentures or a new phone.

Once they’ve signed up, HandUp members are provided with a profile card with basic biographical information, which they can hand out to potential donors.The card contains information for people to donate via a secure SMS system, and the transaction can be carried out on an iPhone.

On stage, Broome announced a cool new feature, called HandUp Communities, which will let donors and homeless members opt-in to send messages to each other. She also disclosed the company’s fundraising goals. HandUp has secured $350,000 in funds from some of San Francisco’s wealthiest and most high-profile tech people, including Calacanis, Ron Conway, Ariel Poler, Michael Birch, and Eric Ries.

What touched the audience most wasn’t Broome’s pitch, although it’s inspiring to see entrepreneurs taking a stance on societal issues. It was Adam Reichart, a homeless HandUp member, who shared his story on stage. 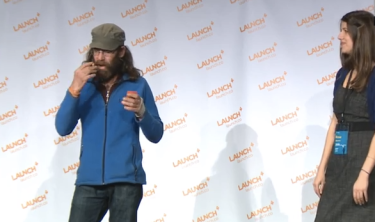 Above: Reichart and Broome on stage at Launch

Reichart described his struggles finding a job and receiving medical care. About five years ago, he broke his jaw but couldn’t afford a procedure. After he signed up with HandUp, he said, “a miracle happened.” A dentist offered to perform surgery pro bono. After that, he said, “someone made a $1,000 donation on Jan. 6 through HandUp for my dentures and pay my phone bill and keep a storage unit.” Reichart is now looking for affordable housing.

“I have a verifiable way to tell people the truth about my needs,” he explained.

(Anyone interested in helping Reichart can donate via his HandUp page.)

The “tech for good” movement

Conferences like Launch promote exciting new technology we’ve never seen before. But HandUp is deceptively simple and took just a few months to develop, as it integrates with platforms like Twilio and Stripe.

HandUp ultimately won the “Social Impact” award, as it uses existing technology for good. It isn’t the only startup attempting to solve entrenched societal problems. Y Combinator is now accepting a few nonprofits and startups like HandUp (although this is a fairly recent development), and venture firms like Omidyar and Kapor Capital are actively looking to fund social enterprises.

MORE: Social entrepreneurs use startups to change the world

Still, it’s early days for the social impact trend, otherwise known as social entrepreneurship. Broome has received her fair share of criticism from potential investors and the media. Salon points out that HandUp “isn’t going to wash away a blight that has resisted decades of hard work to eradicate.”

But HandUp already appears to be making a difference in its first months. The team has signed up about 100 homeless people in San Francisco.

MORE: For more stories like this one, read the homeless innovation series on VentureBeat

At Launch, Broome also shared the story of one HandUp member called Cameron. Cameron moved to San Francisco from Vermont to take care of her mother, who was dying of cancer. Cameron was evicted after her mother passed away and has been living on the streets and in shelters ever since.

Stories like these are all too commonplace in San Francisco, a city where an estimated 7,000 people are living without adequate shelter (there are only 1,100 available shelter beds). The upwardly mobile tech community has been accused of failing to support these people in need. In December, technology executive Greg Gopman inflamed already tense relations by referring to the homeless as “degenerates” in a Facebook post. He later apologized for these comments.

But Broome, who also runs the Homeless Innovation meetup group, holds a more optimistic view. She said in an recent interview with VentureBeat that she started HandUp, as her friends in the tech sector wanted to give to the local homeless. But they feared that their money would be used to feed an alcohol or drug addiction.

HandUp is designed to alleviate that fear. Homeless members can redeem the donation at North Beach Citizens or Project Homeless Connect, a San Francisco-based organization that provides housing support, medical care, food, pharmacy gift cards, and more. In the future, Broome will develop partnerships with Walgreens, Safeway, and others, so homeless members can purchase items from these franchises.

“My long-term goal is for people to use the card to fund housing or a shelter bed,” said Broome.

In the video below, skip ahead to 8:00:00 to watch Broome, cofounder Zac Witte, and HandUp member Adam Reichart present at Launch.