A disturbing new report from the Brookings Institute finds that startup growth, a primary engine of America’s economic power, is slowing down.

“Recent evidence points to a U.S. economy that has steadily become less dynamic over time,” the authors concluded. In fact, the number of new businesses has steadily been cut in half since 1978.

In an email to VentureBeat, a spokesperson for Brookings said the research “does apply across all sectors, including tech.”

It even looks bad for America’s metropolitan areas. “The broad decline in business dynamism occurring during the last few decades nationally is not isolated to a few region,” the report states. 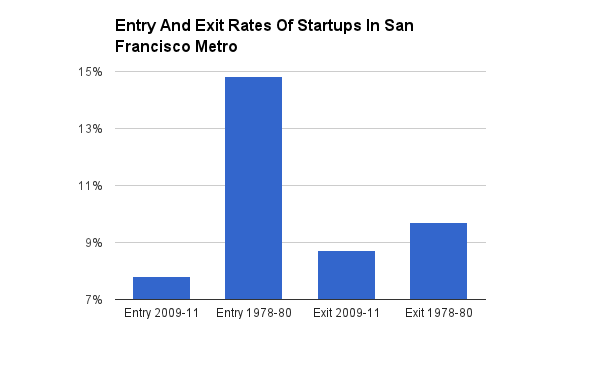 This report also follows a Kauffman Foundation report that startups in the tech sector, are, indeed, on the decline. Temporary surges in business creation are “a blip in a long-term decline in high-tech start-up rates and dynamism,” argues Kauffman Foundation VP Dane Stangler.

The Brookings report says, “Perhaps the best and most immediately effective way” to reduce the decline is to “significantly expand the numbers of immigrant entrepreneurs granted permanent work visas to enter and remain in this country.”

Unfortunately, immigration reform is stalled in Congress until at least next year. Read the full report here [PDF].