If you’re running a tech startup in New York City, Watson wants to meet you — Watson, IBM’s legendary supercomputer, that is.

To help shake its persistent image as a stodgy producer of enterprise tech, IBM has launched a concerted effort to introduce Watson to the myriad startups in the New York City technology scene.

The Watson Group is using Ted Angelus and his team at Bluewater Labs as pathfinders into NYC’s bustling technology hive. Angelus prides himself on his underground tech cachet, so receiving a call from IBM requesting he be a guide for Big Blue into the Big Apple was a shocker.

“They’re trying to get people to recognize that they’re not an old, outdated company run by a bunch of 60-year-olds wearing blue suits,” said Angelus, whose company functions as a NYC-based tech community organizer and consulting group.

IBM announced the formation of the Watson Group in January with a $1 billion infusion of cash. It will move into a gleaming building in St. Marks Place, just down the street from Keith Richards’ old flat, in September. A new $100 million venture fund will bankroll developers building apps with Watson.

When the Watson Group HQ is completed, it will house 2,000 employees devoted to burnishing and expanding the Watson brand.

With the eager DiTanna helping to spearhead the program, IBM is casting a wide net.

“At the end of the day, we’re after innovation that matters,” he said. 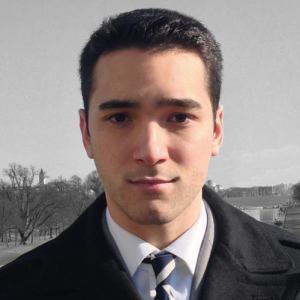 But Watson can’t get to know startups without the assistance of some key people, like Angelust.

“No startup is too small to work with Watson, and there’s still many people who don’t know who the hell Watson is,” Angelus said.

Angelus and his team have been tasked with organizing educational seminars on the benefits of building apps with Watson at NYC’s popular Turntotech, a mobile education startup on the East Side. The first official Watson Group seminar will be held at Turntotech next week, with a focus on health care and finance.

Watson has grown a lot since it beat the tar out of top-ranked “Jeopardy” contestants in 2011 in a series of shows watched by millions.

Since then, IBM opened up Watson to developers in the medical and healthcare arena, for example. Watson is also now a cloud platform, open to developers.

IBM is banking on Watson to find uses in e-commerce, artificial intelligence, wealth management, the food service industry, and crucially, helping to someday find a cure for cancer. There’s now Chef Watson, the Watson Engagement Advisor, and Watson Analytics, which were announced previously.

Watson, it seems, is everywhere. But it’s a stretch to say everyone knows what it really is yet.

“So many people are trying to get their head around Watson,” Angelus said.

But Watson is already making inroads in New York. Researchers at the Memorial Sloan Kettering Cancer Center in Manhattan are using the technology, for instance.

“Researchers can take an individual cancer patient’s DNA, put it into Watson, and Watson, using different databases, will tell you what kind of treatment is recommended,” Angelus said.

“This is personalized healthcare, actually, compliments of Watson,” he said.

Over at Turntotech, employees are already bracing for the onslaught of developers keen on lending their app-building skills to the ever-more-compact artificial intelligence technology. (Watson used to run on a computer the size of a large living room, but has now shrunk to the size of several large pizza boxes, said marketing director Sean Moskowitz.) One hundred people showed up last week to an informal introductory Watson workshop.

“We’re going to do the workshops weekly, to keep up with demand,” Moskowitz said.

Meanwhile, IBM is quickly and fervently trying to move away from its “man in a grey suit” image. In fact, the Watson Group is on a hiring binge, looking for talented developers and designers of all types.

“Do you want to serve search ads — or cure brain cancer?” DiTanna said.

It seems IBM is sparing no expense to leave the past behind. The interior of Watson’s new home was designed by the engineers at Oblong Industries, the same crew that created the special effects for the Tom Cruise blockbuster “Minority Report.”

“We’re absolutely hiring,” said DiTanna, 23, the face of the “new” IBM. “Indie developers, everybody. People you wouldn’t even expect.”