Last week, Adam Draper, Managing Director at Boost VC, the Sci-Fi pre-seed fund, tweeted he was looking for Ocean-related tech startups. “The Ocean is the oldest frontier, and it’s time to solve global problems with the latest technology,” he wrote, followed by “I’m obsessed, and want to profitably help the planet.” You might not have pegged Boost VC as an impact investing fund, but that is exactly what they are and have always been, albeit with an emerging tech twist.

The term “impact investing” was coined by The Rockefeller Foundation in 2007, which for perspective, is the same year the first generation iPhone was released. It refers to a double or triple bottom line approach in which a company pursues not only a wholesome return in profit but also a positive impact for people and/or the planet.

The practice has become increasingly popular over the past few years.

Take ESG investing, for example, which stands for environmental, social, and governance. It’s an investment approach that assumes socially responsible practices minimize a business’s operational risk. ESG is proving to be a great way to convince baby boomers to prioritize the interests of society and the environment at the same level as profit simply because it makes good business sense. In fact, ESG investments currently represent 25 percent of all assets under management globally.

Like Draper, I’m a millennial, so I have a bias toward value propositions that are intrinsically based on a double or triple bottom line approach. A study entitled “Money Meets Morals” published by Swell Investing last September, found that the psychographic profiles of millennials and Gen Z’ers show they are significantly more inclined to view investing and values as going hand in hand with one another. 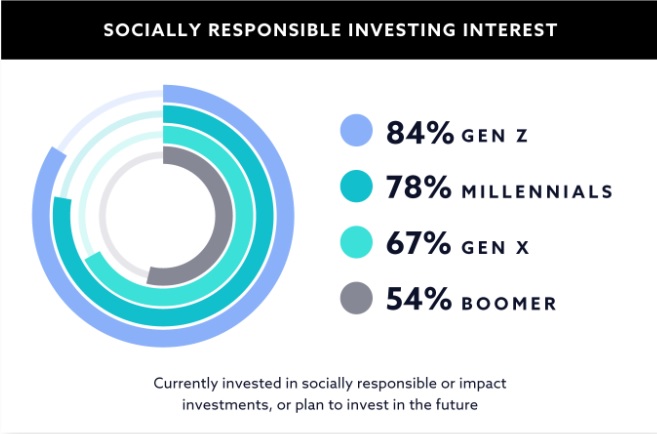 In fact, a key driver that ensures impact investing will only continue to become ever more a staple in the coming years is the current shift of decision-making authority, with baby boomers handing over the reins to the next generations, which tend to be more progressive.

“Millennials will see $30 trillion in wealth under management being transitioned to them in the coming years, and they are twice as likely as previous generations to invest in social impact. So the change is not just societal, but will also be directly financial,” Bastiaan den Braber, an entrepreneur and venture advisor at LUMO Labs, told me. Den Braber’s venture builder program for emerging tech startups recently narrowed its investment thesis to target social impact startups.

“The advent of very powerful emerging technologies such as artificial intelligence, machine learning, robotics, blockchain, and XR can make big differences when combined with smart money coming from venture capital,” he said. “The combination of the two has been the best that has ever happened to make sustainable development goals a reality.”

Den Braber is referring to the UN’s 2030 Agenda that outlines the 17 Sustainable Development Goals (SDGs) that venture funds like LUMO Labs use as more or less the blueprint model to shape and organize their investment strategy.

The prospect of pairing social and environment values with emerging tech in the investment thesis of venture capital firms really appeals to me, and that no doubt has something to do with the fact that I am also a cofounder of a spatial computing startup. If you follow any of the cardinal buzzwords in the space, like AI and machine learning, blockchain, spatial computing, robotics, or IoT, you will likely have come across Singularity University, the Silicon Valley think tank that has been spearheading awareness about “exponential” tech for over a decade now, as well as running programs that illustrate how potent these disruptive mediums can be when it comes to solving humanity’s biggest challenges.

Singularity’s Global Startup Program, for example, has generated over 1,000 impact innovations from over 45 countries; reportedly 88 percent of participating startups have been able to continue to raise funds following the program. So their pool of portfolio companies is probably a good place to start if you want to look for case studies of how happy a marriage new disruptive tech and impact models can make.

“We’re seeing some incredible startups leveraging AI to aid human decision making and improve the quality of data and blockchain solutions to bring transparency to governments,” Monique Giggy, VP at SingularityU Ventures told me. “These entrepreneurs are paving the way for other exponential technology startups to enter the market in addition to demonstrating the use of these technologies to improve lives, open new markets, and generate unique solutions to systemic problems.”

Part of why I think emerging, exponential, or “Sci-Fi” tech (as Draper describes it) is so well paired with the SDGs is that the general mill of the investment community (those that do not typically invest in either category) often poke and criticize startups in both categories for similar weak points, like taking too long to realize their ROI or product-market fit.

Of course, many of these technologies must be wielded with care in proportion to their potential for disruption. In this time of fake news and data privacy scandals, it is important to remember that, like our fiction and Hollywood films ceaselessly warn, Sci-Fi dystopia is just as likely as utopia.

“Tech can be used for both good and evil, much like it always has. Facebook has brought people closer, but Cambridge Analytica weaponized it, etc.,” said João Santos, Senior Principal at MAZE – decoding impact, a €40 million ($45.8 million) impact fund based in Lisbon, Portugal run by a team of millennials.

MAZE believes tech adoption comes from consistently delivering meaningful value to users, not necessarily society as a whole. That’s a message the typical social-impact founder can forget during the strain of the proverbial death valley curve.

“Convenience is king. What really dictates [a technology’s] total net effect on society is how users and non-users are affected by it. New tech allows us to do more with less or engage with entirely new experiences,” Santos told me. “On a macro level, we need to establish basic rules for the game so we can keep predators in check. On a micro level, It’s up to all of us to use emerging and mainstream tech in a constructive way. We believe the latter is harder and far more important.”

That is why impact accelerators and incubators, like the ones run by Boost VC, LUMO Labs, and Singularity University, and MAZE’s new “Maze X” program are so necessary. They’re tailored to and equipped for the needs of impact startups. Each offers in-house support during their program, which can span from a few months to a couple years, so early-stage startups receive all the resources, know-how, and mentorship necessary to align them as closely as possible to the global market, with sanity checks all along the way.

Amir Bozorgzadeh is cofounder and CEO at Virtuleap, which leverages neuroscience research and machine learning in order to translate body language in VR, AR, and 3D environments into psychographics and demographics.