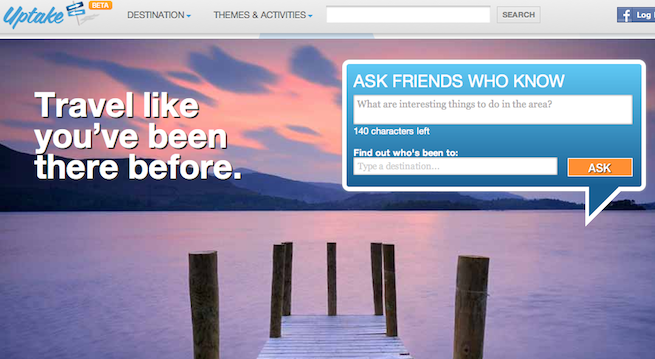 Daily-deals company Groupon has purchased travel site Uptake for an undisclosed amount of cash. This deal marks the third acquisition for the newly public Groupon in February 2012.

Groupon reportedly paid over $10 million for the company, which helps you find information on cities you’re traveling to, All Things D reported today. A source told All Things D that the deal is more of an “acqihire” of Uptake, meaning that Uptake’s 20 person team will likely be merged into Groupon’s operations.

“Groupon has acquired Uptake and we’re excited to continue to build the Palo Alto engineering team with an all-star roster of startup founders and engineers,” a Groupon spokesperson said in an email to VentureBeat.

Uptake enables people to use their social networks to research travel destinations and find accommodations, places to eat, and sites to see in locales all over the world. Groupon has tried to elbow its way into the travel industry with Groupon Getaways — deals that include airfare, hotel reservations, and entertainment provided in partnership with Expedia. Perhaps Groupon is looking to expand its travel services with its purchase of Uptake.

Both companies are staying tight-lipped on the details of the acquisition, but Uptake’s co-founder Yen Lee wrote on the company’s blog that he is delighted by the news: “We’re excited to jump in at Groupon right away — with our attention focused there, you may notice that some of Uptake’s features will slowly wind down.”

Earlier in February VentureBeat reported the company had purchased Hyperpublic, which aggregates place and deal data and Adku, an e-commerce data firm.

It’s interesting to see Groupon throwing money around, given that its first quarter earnings recorded a net loss. However, the company has hinted at an initiative to expand its technology, which could be the motivation for all these acquisitions.

Uptake was founded in 2008 and has raised a total of $14 million from Shasta Ventures, Elliot Ng, and Trinity Ventures.