Women are still underrepresented in the tech industry, and job recruiting site Indeed reported that part of the reason is a failure to retain the women who go into the industry. A survey showed that the No. 1 reason why women leave tech jobs is the lack of career growth.

Of women surveyed, 28 percent said the lack of career growth or trajectory was why they left their last job.

The percentage of women with computer science degrees has actually decreased from a peak of 37 percent in 1984 to a current rate of 19 percent. Of women who have degrees in science, technology, engineering or math (STEM), only 26 percent work in technical careers, compared to 40 percent for men. 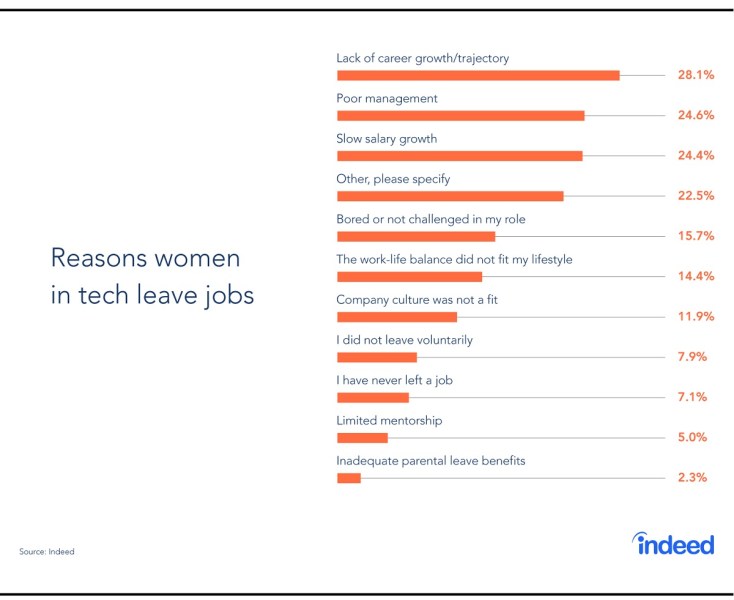 Above: The top reasons why women leave tech jobs.

Indeed said that many women in tech believe that men have more career growth opportunities — only half (53 percent) think they have the same opportunities to enter senior leadership roles as their male counterparts.

Salary topped the list as the most important factor for women in deciding on a position, with one in three respondents choosing it. But transparency is an issue — 40 percent of women said they wish employers would have been “more transparent” about salary in the interview process.

Once in a job, salary remains a primary concern. When asked what challenges they face, wage growth was the top response, cited by almost half of respondents (45 percent).

This is more than those who said bias or discrimination (23 percent) or sexual harassment (12 percent) had been challenges. 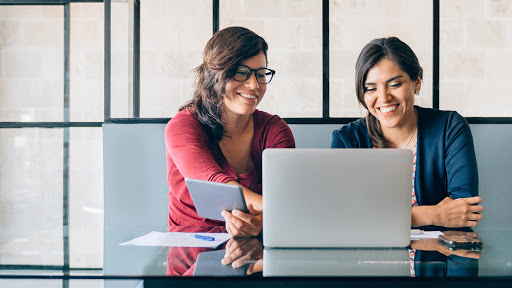 Above: Women in tech are most likely to leave jobs because of lack of career advancement.

Wage growth was also the most commonly cited challenge women expect to have in their career (33 percent).

What could improve the situation? Indeed said that having transparent salary information, like posting salaries in job descriptions, could help. Over three quarters (76 percent) of women in tech said that this would help them to identify and negotiate more fair compensation for their role.

Aside from improving salary transparency, working toward gender pay equity and empowering women to ask for promotions and raises could also help with retention. A creative example of this can be found at The Motley Fool, a financial newsletter, which recently paid employees $200 to ask for a raise in order to minimize the gender pay gap. Even if the employees got turned down, they still received the $200.

There is high demand for internal mobility among women in tech — 61 percent said that at some point they have wanted to switch to a different role within their company.

Of the women who said they wanted to switch roles internally, a whopping 80 percent said they would be more likely to stay if there was a clear way to do it.

Health insurance was the most important benefit to women in tech, with 37 percent selecting it. Second most popular was flexible work schedule (24 percent), and number three was bonuses or regular raises (19 percent).

More than any other age group, women age 25 to 34 cite the inability to break into management or leadership roles (27 percent) and bias or discrimination (25 percent) to be the biggest challenges they have faced in their careers. However, this age group is also more likely than women as a whole to leave a job because the team wasn’t diverse enough (27 percent compared to 23 percent for all women) or there wasn’t enough female leadership representation (24 percent compared to 20 percent for all women). Indeed surveyed more than 1,000 women in the poll.