There’s big money in e-commerce — especially in India, whose web-browsing populace is on track to surpass the United States’ 260 million Internet users in the next few quarters.

Indian classified ads site Quikr has raised $90 million in new financing, the startup announced this morning. It’s one of India’s fastest-growing companies, with over 30 million unique visitors per month and annual revenues of roughly $50 million (from traditional advertising and promoted listings).

Quickr is neck-and-neck with OLX.in, the other major classifieds site in India. Recent data shows Quickr has pulled ahead in unique visitor traffic over recent weeks, but OLX.in visitors apparently spend longer on the site and view more pages per visit. (See the comparison below, which originally appeared on Trak.in.) 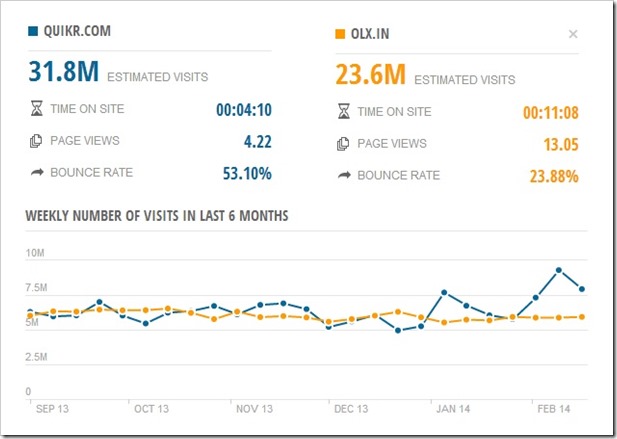 Quikr’s $90 million raise values the company at over $250 million, according to the Economic Times of India. Swedish investment firm Kinnevik led the round, which marked its first foray into India. It’s no stranger to classifieds, though: Kinnevik also backed Russia’s Avito, which became the world’s third-largest classified ads site following its $570 million deal with South Africa’s Naspers last year. (Craigslist and China’s 58.com are the first and second largest, respectively.)

“Quikr has grown rapidly based on a deep understanding of the Indian market,” said Mia Brunell Livfors, president and CEO of Kinnevik, in a statement. “It’s targeting a tremendous opportunity in a large growth market and we look forward to being a part of its exciting journey forward.”