There are nearly 300 industrial-focused companies within the Fortune 1,000. The medium revenue for these economy-anchoring firms is nearly $4.9 billion, resulting in over $9 trillion in market capitalization.

Due to the boring nature of some of these industrial verticals and the complexity of the value chain, venture-related events tend to get lost within our traditional VC news channels. But entrepreneurs (and VCs willing to fund them) are waking up to the potential rewards of gaining access to these markets.

Just how active is the sector now? 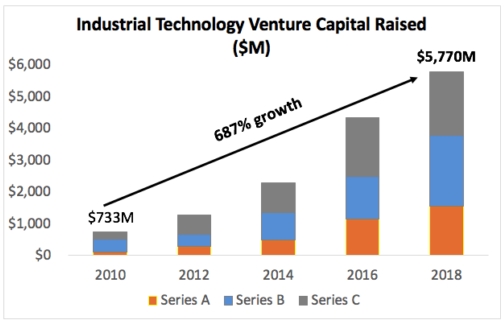 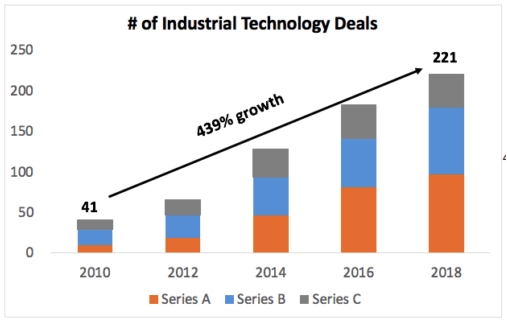 That’s right: Last year nearly $6 billion went into Series A, B & C startups within the industrial, engineering & construction, power, energy, mining & materials, and mobility segments. Venture capital dollars deployed to these sectors is growing at a 30 percent annual rate, up from ~$750 million in 2010.

And while $6 billion invested is notable due to the previous benchmarks, this early stage investment figure still only equates to ~0.2 percent of the revenue for the sector and ~1.2 percent of industry profits.

The number of deals in the space shows a similarly strong growth trajectory. But there are some interesting trends beginning to emerge: The capital deployed to the industrial technology market is growing at a faster clip than the number of deals. These differing growth trajectories mean that the average deal size has grown by 45 percent in the last eight years, from $18 to $26 million.

Detail by stage of financing 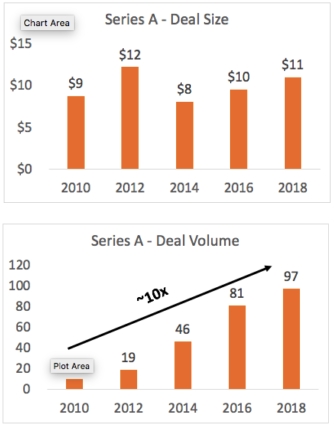 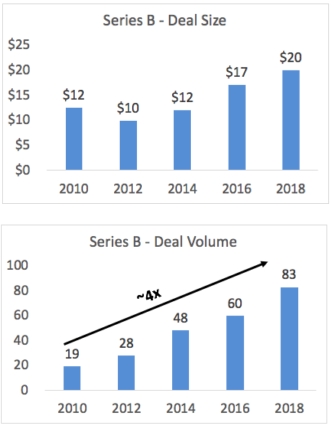 Median Series B deal size in 2018 was $20 million, an 83 percent growth over the past five years and deal volume is up about 4x. 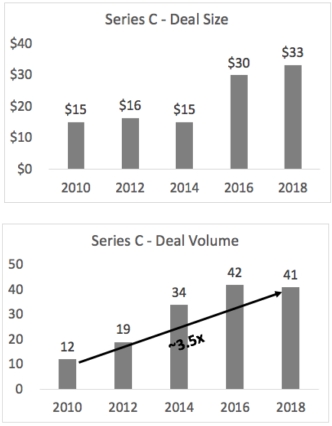 Median Series C deal size in 2018 was $33 million, representing an enormous 113 percent growth over the past five years. But Series C deals have appeared to reach a plateau in the low 40s, so investors are becoming pickier in selecting the winners.

These graphs show that the Series A investors have stayed relatively consistent and that the overall 46 percent increase in sector deal size growth primarily originates from the Series B and Series C investment rounds. With bigger rounds, how are valuation levels adjusting? 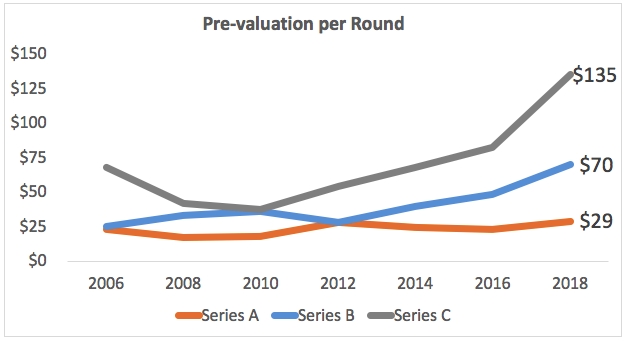 The data shows that valuations have increased even faster than the round sizes have grown themselves. This means management teams are not feeling any incremental dilution by raising these larger rounds.