Intel Capital is announcing today that it has invested $22 million in 11 startups, and the world’s biggest chip maker is on track to invest more than $500 million in technology companies this year.

Intel invests to advance its own strategic interests, but it pours so much money into the tech ecosystem on a global basis that it has a huge impact on the overall tech economy.

The company made its announcement at the 16th annual Intel Capital Global Summit, which is expected to draw more than 1,200 people to San Diego, California. I am attending the event to moderate a panel on augmented reality and virtual reality, two of the hottest sectors for investment. The event represents a changing of the guard for Intel Capital, as its longtime president Arvind Sodhani will retire at the end of the year and hand the job over to Wendell Brooks, a longtime investment executive.

“With today’s announcement, we’re on track to invest more than $500 million in startups in 2015,” said Brooks, Intel corporate vice president and incoming president of Intel Capital, in a statement. “Together with another robust group of exits, we’re poised for one of the organization’s strongest years ever.”

Intel’s strategic investment and acquisition group has invested $11.6 billion since 1991 in 1,400 companies in 57 countries. During that time, 213 Intel Capital portfolio companies have gone public and 377 were acquired.

In his opening keynote, Sodhani presented the first-ever Intel Capital Entrepreneur of the Year Award to Kevin Reid and Rodney Rogers, cofounders of Virtustream. This award recognizes their ability to build a startup from the garage to a $1.2 billion exit in less than six years. 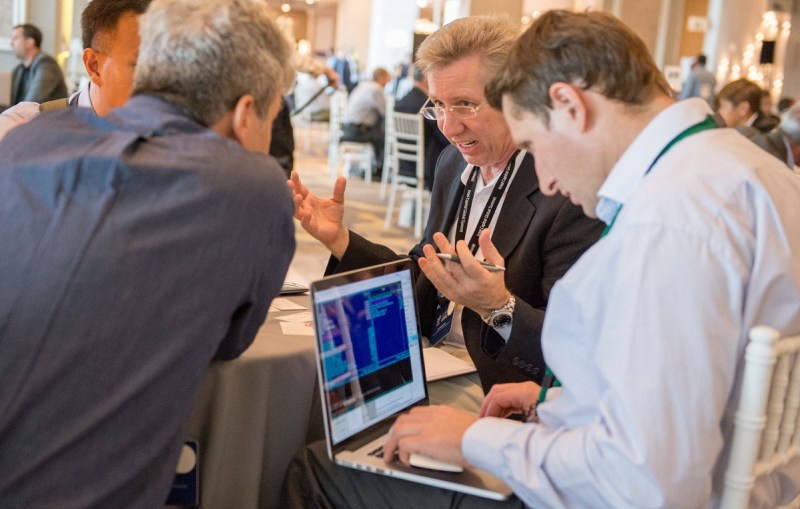 Above: Deal-making at last year’s Intel Capital Global Summit in 2014.

The funding recipients are as follows:

FreedomPop (Los Angeles). Launched in 2012, FreedomPop provides free high-speed Internet and mobile phone services across the country to ensure no one is left off the grid.

LISNR (Cincinnati, Ohio). The startup created Smart Tones, a new communication protocol that sends data over audio using a high-frequency, inaudible technology. This digital sound file turns any speaker or piece of media into a beacon. The company is the latest to receive money from Intel Capital’s $125 million Diversity Fund.

Sckipio (Ramat Gan, Israel). A creator of G.fast modems, this startup hopes to deliver up to 1 gigabit-per-second broadband to homes over the last mile of copper phone wires.

What3words* (London). The company has created a platform to find and communicate a location more accurately and more easily than global positioning system (GPS) technology.

Body Labs (New York). This company collects, digitizes, and organizes all of the data and information related to human body shape, pose, and motion. Its mission is to transform the human body into a digital platform upon and around which goods and services can be designed, produced, bought, and sold.

In addition, Intel Capital said that it has also invested in Parallel Machines, an early stage company focused on predictive analytics and machine learning. With offices in Tel Aviv and elsewhere, the company was founded in 2014 by entrepreneurs with backgrounds in distributed computing, system programming, machine learning, and statistics.