Since 2002, Invoice2go has provided small businesses with one tool—a simple way to create an invoice and send it to clients. Now, with $15 million in new funding, the company is preparing to expand more deeply into the small business product territory.

Today, Invoice2go is partnering with Stripe to allow invoice recipients to pay their bills through its platform. With this integration, Invoice2go joins the growing number of companies dedicated to building out services for small businesses. It also puts Invoice2go more closely in competition with Square, PayPal, QuickBooks, and FreshBooks — all of which offer invoicing as a feature in their overall back office ecosystem.

Invoice2go got its start as desktop app for managing invoices, but, with the launch of the first iPhone, the company made an early play on mobile. Since then it’s been featured many times on the front page of the iOS App Store in various countries. With more small businesses entering the market in the U.S., the company believes it has a real opportunity to provide services to its customers. 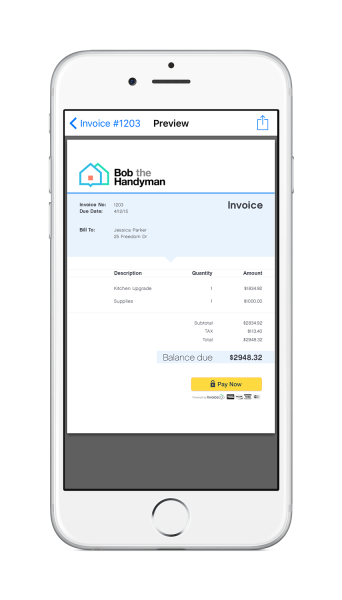 Attitudes about entrepreneurship are returning to pre-recession levels, according to a Babson College report on global entrepreneurship in 2014. More than two-thirds of Americans believe being a business owner conveys status, compared with 67 percent in 2009. No doubt, the rise of television shows like Silicon Valley, Bazillion Dollar Club, and Shark Tank are goading Americans to turn their ideas into ventures. Last year, ten percent of the population was in the process of starting a business, according to Babson’s report.

All these new startups need office management software, and tons of payments players are rushing to fill that void. Invoicing is only one need for small business owners, which is why it’s only offered as a feature in most small business packages. And with all these big players vying for merchant attention, Invoice2go had to grow to stay relevant. But the company processes $1 billion worth of invoices on a monthly basis (from 200,000 businesses) and believes it’s in a good position to compete.

“There’s invoicing apps, there’s CRM apps, there’s job management apps, they’re all working separately and they don’t talk all that well to each other. What happened if there was one platform where they could all connect. There’s lots of opportunities out there,” said founder Chris Strode, etching out his vision for the future. He added that, in the immediate future, the company will focus on building more financial tech products.

This round of funding, led by Ribbit Capital, brings Invoice2go’s total funding to $50 million.