Fitbit, the fitness-tracking bracelet darling of the IoT space that pioneered a niche as a low priced “quantifiable self” device, made its debut this morning on the New York Stock Exchange. With a $20 IPO price, up from the original range of $14-$16, it’s safe to say that investors clearly wanted to get their hands on as much of this $600 million deal as possible; although some are sounding sirens of Blackberry-ish obsolescence.

So, what does the IPO price tell us about smart money’s bet on FitBit’s future? And how did the company’s private round investors make out in the IPO?

At $20 a share, the $735 million Fitbit IPO implies a $3.7 billion valuation (Enterprise Value: assuming $400 million of net cash), which corresponds to a 3.8x Enterprise Value/Last 12 Months of Revenue ($973 million) multiple. Using a multiple of sales is a common valuation metric for high growth companies. Last year FitBit grew its topline revenues at a very impressive 275 percent, which should explain the investor demand. In comparison, GoPro is valued at $8 billion, grew topline at 41 percent during the same period, and trades at a 5.66x 2014 multiple of Enterprise Value/Revenue in 2014.

So today’s IPO pricing was 1,300 percent higher than the last raise, representing an ASTONISHING premium for investors in that last private round, less than two  years ago … shown below: 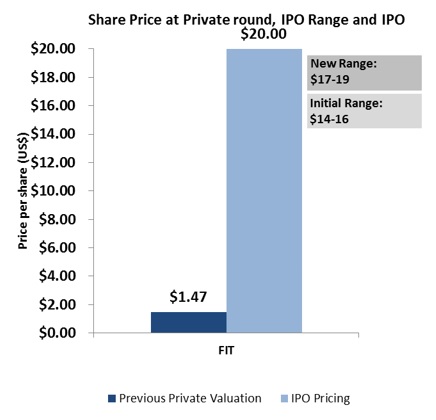 Let’s look at how “big money” late stage investors performed compared to where the stock traded initially in the open market, where any investor could buy the shares. 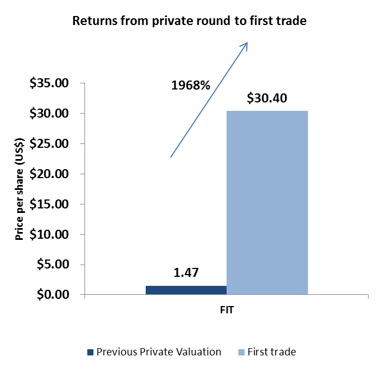 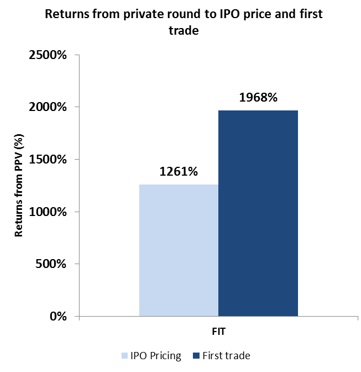 A brief history of their prior rounds appears below:

So we are scoring the Fitbit investment a colossal win for the late stage investor (along with those investors that were allocated IPO stock at $20) and another loss for the bubble proponents. Real companies with real revenue should be judged on merit and multiples and remain out of the bubble argument.