This week we look at newly public Shopify, a fast growing Canadian company that offers a best in class e-commerce platform with a very compelling and differentiated path to continue growing. If there was a model on what a company’s road to IPO should look like, this would be it — for companies, investors, bankers, etc:

Shopify’s original IPO price range was $12-$14, which was subsequently increased to $14-$16. The company’s last private round (Series C) was done at $10.13. The actual IPO priced today at $17 or 68 percent higher than the last raise, representing a significant premium for investors in all prior private rounds. 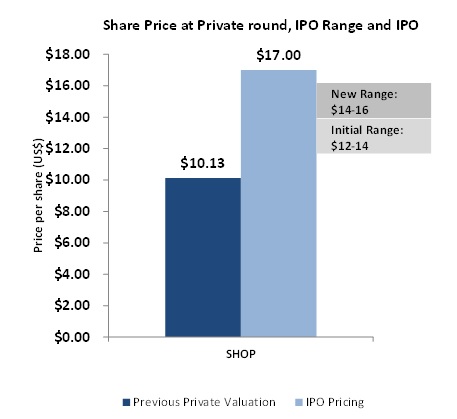 As always, it’s important to measure the return from where the stock trades in the open market, i.e. where a fund would alternatively be able to buy the stock it purchased in the private round.

As of today’s first trade ($28), the return profile for the latest stage investors had increased to a 176 percent return. Investors with a long-term interest in owning the stock as a public company had the opportunity to purchase stock at $10.13 18 months ago in the Series C or at $28 in the open market with the same access as anyone else. Outside of stock allocated to them on the deal (which is always a scare resource), the 176 percent Series C purchase return was extremely attractive at 92 percent annualized, shown below: 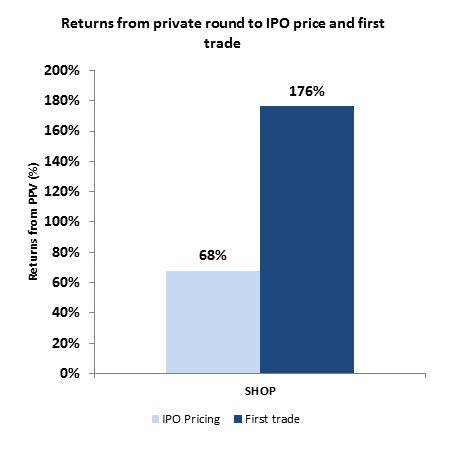 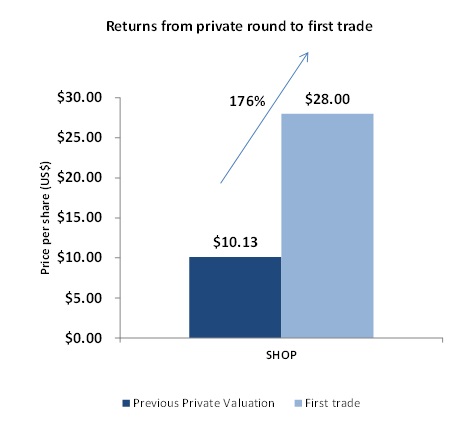 It’s interesting to note the 18 month time frame between the Series C, which closed in October and November of 2013, and today’s IPO. Our review of data has shown the average time from last private round to IPO of late has been 20 months, so it is directly in line. This speaks to the pre-IPO nature of these final rounds. A brief history of their prior rounds appears below:

So we are scoring the Shopify investment a win for every private round investor (and those investors that were allocated IPO stock at $17) and a loss for the bubble proponents.

We recommend naysayers do not include Shopify in their argument against late stage investing.