For the last few years, many leaders in the Massachusetts innovation community have been arguing that non-compete agreements should be eliminated.

Article after article has been written in support of putting this policy forward to increase the dynamism of our ecosystem and send a message to the broader innovation community that Massachusetts is a great place to start and develop your career. Many studies have shown that non-compete agreements reduce R&D investment and stifle innovation. MIT Professor Matt Marx conducted a seminal study in Michigan that showed the enforcement of non-competes caused a sharp drop in mobility for inventors, thereby slowing innovation and economic dynamism. Professor Mark Garmaise of UCLA published a study which had similar findings and, further, assessed the state by state use of non-competes, concluding that Massachusetts had one of the strictest in the nation (see chart below from Highland’s Paul Maeder, putting states on a 0-9 enforceability index scale). 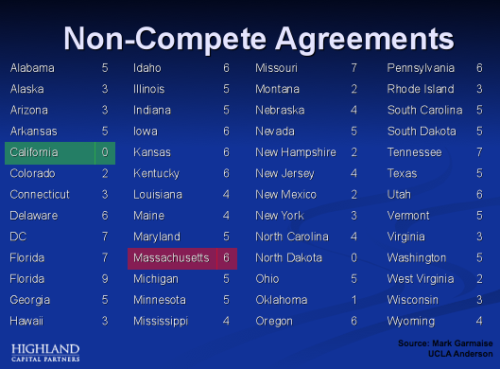 Today, Governor Deval Patrick is officially proposing to change all that by putting forward legislation that will eliminate non-competes outright.  If passed, this has the potential to eliminate a huge barrier to the free flow of talent to the best opportunities, thereby creating a more dynamic entrepreneurial environment in the state.

I give tremendous credit to Spark Capital’s Bijan Sabet, who first raised this issue seven years ago.  Many legislators and leaders got behind the effort, but no one has been able to galivinize enough support to convince the governor to lead here.  Greg Bialecki and Jennifer Lawrence have made that happen, and the tech community will be forever grateful if the legislature will embrace this effort, even if in the face of big-company opposition.

House Speaker Robert DeLeo has been a champion for the innovation economy for years, kicked off by his (somewhat cheeky) open letter to Mark Zuckerburg to urge him to open a Facebook office in Massachusetts.

Let’s hope he’s willing to support legislation that makes it easier for the next Mark Zuckerburg to leave his or her job to start the next Facebook — without the fear of old-school shackles and reprisals.